In Rudolph, NY, we love Christmas so much we celebrate it all year round. 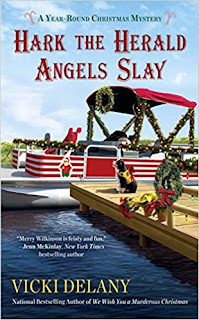 It's July and that means the semi-annual Santa Claus Parade. Yes, semi-annual. We have one in July as well, when Santa arrives to spend his summer vacation on the shores of Lake Ontario.  This year, the town decided to do something different and it’s going to be a boat parade. A flotilla of yachts, sail boats, pontoons, motor boats, canoes, kayaks, jet skiis, maybe even a raft or two, will escort Santa to town.

Because he’s such a great guy, Santa’s agreed to spend some of his holiday meeting his fans. We’re going to set up a beach chair and umbrella on the beach and let him meet kids. Elves will be there in their bathing suits and the Head Toymaker himself will take early requests.

Mrs. Claus will be on hand to ensure Santa regularly applies his sunscreen and doesn’t go too far
from shore.

In real life, Mrs. Claus is me, Merry Wilkinson, owner of Mrs. Claus’s Treasures, a gift shop on Jingle Bell Lane.  I’ll have to think of a suitable costume. I’ll melt in my regular December Mrs. Claus get up.

It’s going to be a lot of fun. Of course, there will be bands and singers at the park, games for the kids, plenty of refreshments. Even a concert the night before for the teenagers.

I hope you can join us.

Unfortunately, my ex-fiancé Max Folger (the cheating rat) showed up with a team from Jennifer’s Lifestyle Magazine, to do a feature on Rudolph.  Max, I fear, has an ulterior motive in coming to Rudolph. I just hope he doesn’t cause any trouble.

Hark the Herald Angels Slay is the third in the Year Round Christmas mysteries from Berkley. It will be released on November 28, and is now available for pre-order.

Vicki Delany is also the author of the Sherlock Holmes Bookshop series (Elementary She Read, Body on Baker Street) and as Eva Gates, the Lighthouse Library books.