Time to meet the friends - a Killer Party 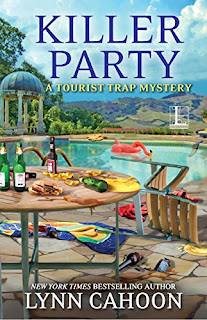 So, I thought meeting my boyfriend's brother and ex wife was stressful. Now, I have to meet his childhood friends.  But I'm starting in the middle. I should identify myself. I'm Jill Gardner, owner of Coffee, Books, and More in South Cove, California, a pretty little tourist town. It's a great place to live and work. You should stop by sometime.

I'll be out of the store for a few days because my boyfriend-slash-roommate is taking me to a bachelor party with him. A couple party apparently for Levi Wallace, who grew up with Greg. What if they don't like me?

Or worse, what if I don't like them? I haven't met a lot of people from Greg's past. And the ones I have, like his brother, don't seem to warm up to me. In fact, the guy thought I was keeping Greg from getting back together with his ex - Sherry King. Sherry's a real piece of work.  I can see why they didn't work.

But I don't say that. Mostly because of the judge not thing. I don't want him to meet one of my ex's and wonder, what the heck were you thinking. Because if he did, I couldn't tell him.

Anyway, we're going to this weekend party at The Castle, a local tourist stop. It's got so many antiques, its not funny. And we get to sleep there. You could die for the pool alone.

Of course, I packed my swim suit. Now, I just have to pick out a few books to read, just in case everyone hates me. Friend reunions. I'm so looking forward to being the new girl.

For a gang of old college buddies, the quaint resort town of South Cove, California, is the perfect spot for a no-holds-barred bachelor party. But for Jill Gardner-owner of Coffee, Books and More-this stag party is going to be murder . . .
After a few months of living with her boyfriend Greg, Jill is still getting used to sharing such close quarters, but she's got no hesitation about joining him for a weekend at South Cove's most luxurious resort. While Greg and his college pals celebrate their buddy's upcoming wedding, Jill intends to pamper herself in style. But when the groom is found floating facedown in the pool, Jill must find the killer fast, or she might not have a boyfriend to come home to any more . . .
Sign up for Lynn's newsletter at www.lynncahoon.com
Submitted by Lynn Cahoon