To Tell or Not to Tell? 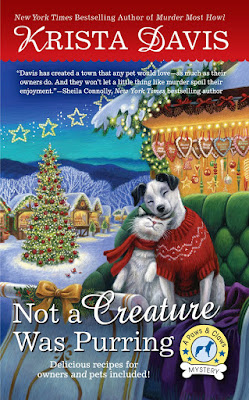 The Paws and Claws Mysteries

I have a problem. When my beloved grandaughter Holly was a little girl, her parents divorced and left Wagtail. She stills remembers the magical Christmases here in Wagtail and at the Sugar Maple Inn. She's very excited to finally be spending the holidays here again.
When Holly's parents divorced, I was determined not to lose contact with my adorable granddaughter.  I convinced her parents to send her to me each summer. Those were such lovely times. Along with her cousin and my best friend's grandson, Holmes, Holly played and swam and hiked and worked at the inn.

All was fine. But children grow up and make their own lives. Holly worked in Washington, DC in fundraising, and Holmes lived in Chicago where he worked as an architect. Holmes's grandmother, Rose, and I played a sneaky little trick to bring them together again. When they met as adults, well, I don't exaggerate when I say sparks flew. You could see it in their eyes. They were meant to be together. Rose and I have done everything we can to throw them together.

But Holmes is engaged. Even worse, his fiance is coming to Wagtail with her entire family for Christmas! It's the big meeting between the two families. And poor Holly knows nothing of this. She goes merrily along looking forward to Christmas.

Do I tell her now and ruin the next couple of months for her while she dreads Christmas? Or do I keep it to myself and and just hope for the best? What would you do?