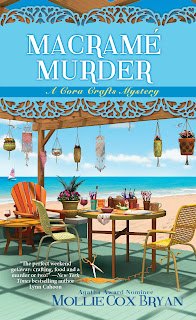 I grew up near Pittsburgh, Pa. In the summers, I swam in rivers and streams, but oceans were the stuff of dreams. At the age of 21, I finally saw the ocean. I’ll never forget it. To this day, I still get that awestruck feeling when I set my eyes on on the splendor of the beach.
One of my favorite things to do is walk along the beach and collect shells, sometimes alone and sometimes with a friend. I know that shell collecting is a big pastime for beach goers. But other than placing the shells into a pretty jar or arrangement, what do people do with them?  Up-cycling is a big thing for me, you know.
After researching on Pinterest (one of my favorite online places), I thought I’d give sea shell frames a go. Not only was it easier than I expected, but I found that it was fun trying to decide how to arrange the shells.
I purchased three wood frames from Michaels for $3.99. I used one frame as a template, arranging my shells without the glue. Then, I transferred one shell at a time, gluing one at a time, to another frame, using the practice template as my model.
I used 9001 glue. Be careful of what color you choose. I went with the no-color choice for my first attempt.  The other thing to be aware of is that the glue is powerful. I suggest an open, airy room—or crafting outside, which is what I did. The fumes are strong. 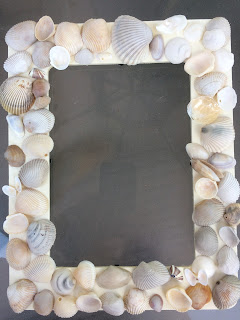 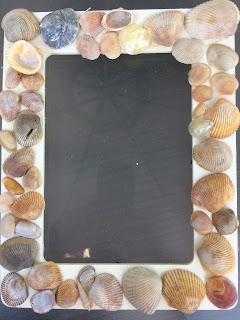 I think they turned out well for my first try. I know that every time I look at them, I’ll think of the special few beach days. And even if the frames aren’t perfect, that wasn’t really the point. The point was twofold: to do something useful and cute with shells, and to remember those sweet summer days.

Mollie Cox Bryan writes cozy mysteries with edge and romances with slow, sweet burn. She’s just published the third book in her new Cora Crafts Mystery Series: Macrame Murder. The first book in the series, Death Among the Doilies,  was selected as "Fresh Fiction Not to Miss" and was a  finalist for the Daphne du Maurier Award. The second book, No Charm Intended, was named a “Summer 2017 Top 10 Beach Read” by Woman's World. She also wrote the Agatha-award nominated Cumberland Creek Mysteries. Several of the books the series were short-listed for the Virginia Library People's Choice Award. She makes her home at the foothills of the Blue Ridge Mountains in the Shenandoah Valley, Va., where she works as a researcher and fact checker and writes in the early morning hours. Visit her and sign up for her newsletter at molliecoxbryan.com. Or follow her on Twitter @molliecoxbryan, Facebook https://www.facebook.com/molliecoxbryanauthor/, Pinterest or Instagram.