On 29th September 2017 the fourth book in the WISE Enquiries Agency Mystery series – THE CASE OF THE UNSUITABLE SUITOR – will be published in hardcover in the UK. It won’t be published in the USA and Canada until January 2018. Today you can WIN an early copy of the book.

A short excerpt follows (from chapter two) and I hope you enjoy it. (NOTE: The answer to my question below is in the excerpt!)

Leave a comment below telling me the name of the person you suspect is the "UNSUITABLE SUITOR" in the title of the book to stand a chance of having your name plucked from the metaphorical hat to win a signed copy of the book – just as soon as I have one to sign! Comments to be left by midnight Eastern on Saturday 23rd September. Open to all - wherever in the world you live :-) 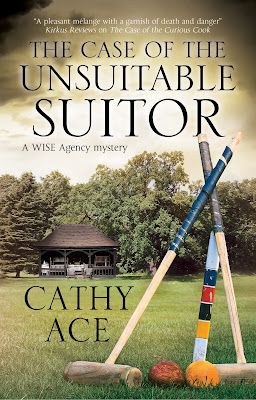 Cathy Ace is the Bony Blithe Award-winning author of The Cait Morgan Mysteries and The WISE Enquiries Agency Mysteries (#4, The Case of the Unsuitable Suitor will be released in hardcover in the UK in September 2017 and in the USA & Canada on January 1st 2018).  You can find out more about Cathy, her work and her characters at her website, where you can also sign up for her newsletter with news, updates and special offers: http://cathyace.com/