Meet Sully Sullivan! (Plus a Giveaway!)

By Sully Sullivan from the Theater Cop Mysteries by J.A. Hennrikus 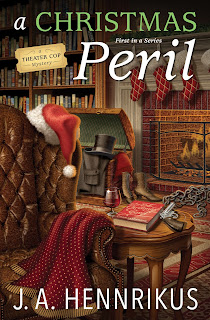 My name is Sully Sullivan. I live in Trevorton, MA, a small town on the North Shore of Massachusetts. I used to be a cop, but I was forced to retire a few years back (a story for another time) so I moved home, and took over as the general manager of the Cliffside Theater Company. That's right. I run a theater company now.
You know, when I took the job I didn't think I had many transferable skills. I was wrong. In my old job, I dealt with belligerent drunks. In this new job, right now? We're doing A Christmas Carol, and our Scrooge is a drunk. Sadly, my office doesn't have a jail, but I'm thinking about asking the props department help me out.
What other skills transfer? Negotiation classes are useful during production meetings when costumes and lights both need more money. Paperwork is paperwork, and there's plenty of it in this new job. And of course, there's the ability to tell if someone is lying. That's come in pretty handy.
The big surprise of the job? I love it. I thought this would be the "I need to do something while I figure my life out" job, but it's ended up being a new career. Sure, some days are easier than others, but the good far outweigh the bad.
Until this show, that is. This show the bad days are outnumbering the good. Scrooge isn't the only problem. Far from it. But to top off the production worries? My friend Eric's father was killed last week. They think Eric did it. I don't believe that, not for a minute. But I have no idea who could have. How could I? I'm not a cop anymore.
But maybe it's time to polish off some of my investigative skills, and help Eric.
************
A Christmas Peril was published in earlier this month, and is the debut of the Theater Cop Mystery series. I will choose one commenter on September 23 to win a copy of the novel!
***************
J.A. Hennrikus also writes the Clock Shop Mystery series as Julianne Holmes. She tweets as @JHAuthors, is on Facebook and on Instagram as @JAHenn.