Being the New Kid Can Be Deadly 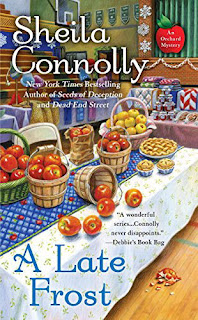 by Meg Corey Chapin and Seth Chapin, from A Late Frost (Orchard Mystery #11) by Sheila Connolly

“I feel guilty, not doing anything,” Meg Corey (she was still trying to get used to using Seth’s last name Chapin) said, stirring her coffee.

“You’re not doing nothing,” new husband Seth Chapin told her firmly. “You’re conserving energy for the coming season. Right now your apple trees are resting, and so should you. You’ll be more than busy enough in a month or so, so enjoy your time off.”

“I’m trying.” Meg sighed and forked up some of Seth’s pancakes with local maple syrup. “How are the plans for WinterFare coming along?”

“We’re good to go,” Seth told her. “The high school gym is booked, and we've got plenty of vendors to fill it. Monica Whitman has really thrown herself into the project and pulled it all together. She’s definitely an asset to the Granford community.”

“I sympathize with her. I remember when I first arrived in Granford—I didn’t know anybody, I had no idea what I was doing, and then there was that problem with the body of my ex-boyfriend in the septic tank. Did you really think I’d killed him?”

Seth smiled. “Well, you were the obvious suspect, and it was your septic tank. But I didn’t know you then. Clearly you couldn’t kill anyone.”

Meg smiled back. “I’m glad you noticed. I can’t even kill spiders. But I understand where you were coming from then. You were protecting Granford, because it’s your home and you are an elected official of the town. I came in a distant third.”

“Of course it is. Believe me, I understand. I think Monica is smart, finding a way to meet as many people as possible quickly. And I love the idea of a festival at this dreary time of year, and I’m sure people will welcome the chance to get together and talk and enjoy local foods and crafts.”

“So we all owe Monica a vote of thanks. It’s going to be a great event,” Seth said.

And so it was—until something went very wrong. You’ll have to read A Late Frost to find out what happens, but here’s your chance: leave a comment about being a newcomer by midnight on Thursday and I’ll draw a name to win a copy of A Late Frost (yes, I have copies already!) before it’s released on November 7th.

Or you can order it at Amazon or Barnes and Noble