First I have to tell you that I am lucky enough  to live in the bustling French Quarter of New Orleans, and  I own the Memory Mine Scrapbooking shop on Governor Nicholls Street. Please stop by anytime you are in town.

New Orleans is a fabulous place to live and work. The atmosphere is always crackling with the vitality of a town filled with fun and exciting things to do. One of my favorite events is the Winter Market. I always consider it to be the official start of the holiday season. Restaurateurs and other venders set up along the banks of the mighty Mississippi and offer samples of food, liquor and other wares putting everyone in a festive mood.

You won’t believe what happened at the last Winter Market.  My BFF Ava Gruiex and I were strolling along, tasting wine and having a grand time when we wound up in the wrong place at the wrong time. Quigg Brevard, a restaurant owner I briefly dated years ago, was screaming and threatening a man I’d never seen before.  I later found out his name was Martin Lash. He was a restaurant reviewer who had written a terrible review about Quigg’s pride and joy, Mumbo Gumbo.

A few minutes later, while Ava and I were looking for treasure at a clothing booth featuring risqué lingerie, the very same Martin Lash came stumbling around the boutique tent with a huge kitchen fork stuck in his neck. He dropped right at our feet, dead as a stone.

Horrible as that was, the worst was yet to come—for me at least. The last thing I needed was to have my long time beau Detective Edgar Babcock find me at the scene. But there I was when he pulled up. Worse still, within a few minutes, he discovered that Quigg Brevard was there and could easily be the main suspect in Martin Lash's murder. Let’s just say, Babcock isn’t always as cool as he pretends to be when it comes to my being anywhere near Quigg or anywhere near one of Babcock's murder cases for that matter. 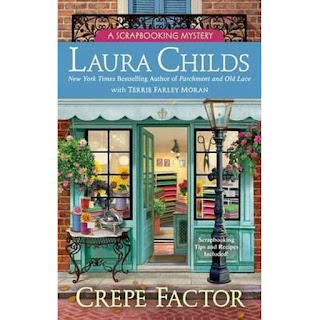 To celebrate this month’s mass market paperback release of Crepe Factor, we are giving away one book to a lucky commenter below. Why not comment about scrapbooking? You’ve tried it. You never tried it. Your Aunt Sally is an avid scrapbooker. Tell us anything but don’t forget to include your email addy in this format: name(AT)server(DOT) com to avoid the spam bots. Giveaway closes at midnight Sunday, October 22nd.