Hello from a Cat Named Mouse! 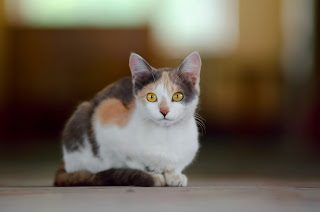 Hi there.  I’m Mouse, a feline in author Tracy Weber's upcoming mystery, Pre-Meditated Murder!  Yes, I realize Mouse is a silly name for a cat, but what can I do about it?  No human can pronounce my real name.  It’s a mixture of meows, head bumps, and purrs.  So, since the human who catnapped me named me Mouse, I guess it will have to do.


I’m six months old and I live at CB Cuts, a hair salon in Cannon Beach, Oregon.  Some people call me a Hemmingway cat; others call me polydactyl.  I don’t know what either of those words mean, but people always look at my front paws when they say them, so I assume they’re talking about the fourteen cool toes I have on my front feet.


I used to live in the courtyard downstairs.  In some ways that was more fun, because I could wander anywhere I wanted to.  Now I’m stuck here with only a large room and my extra special hiding place.  Mostly, though, living outdoors by myself was scary, hungry, and lonely.  Crystal (the human who trapped me) says I’m semi-feral, but she’s hoping that she’ll be able to tame me someday.  Good luck with that. 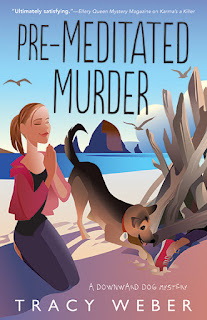 Crystal’s been upset the last few days.  An old friend of hers named Michael came back to town, and a few days later her best friend, Gabriella, was murdered!   I’d met Gabriella a few times.  She was OK, except when she tried to touch me.  I do not like to be touched. Do you blame me? The last time I let Crystal touch me, she threw me in a cage and incarcerated me here. Crystal doesn’t really like Kate, but I think she’s OK.  Kate’s the yoga woman with the bad haircut who’s trying to solve the murder.


Kate and I will get along fine as long as she doesn’t try to pet me.  If that pointy finger of hers gets within six inches of my fur, I’ll scratch it off. And with seven claws on each front foot, I’m an Olympic-level scratcher.  Do you think I’ll have to teach her a lesson?


Say hi to Mouse and tell her about the cats in your life! Leave a comment below by Tuesday, October 17, and you'll be entered to win an autographed, advanced copy of Pre-Meditated Murder.
Good luck!