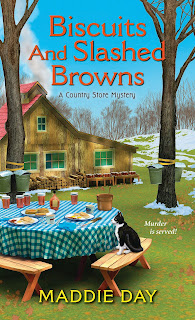 NEWS: Denisesc is the randomly selected winner. Congrats, Denise, and I'm so sorry I don't have an ARC for everyone!

By Danna Beedle, from Maddie Day's Country Store Mysteries -  with a giveaway!

Hi, you guys. My boss Robbie Jordan said our author told her it was my turn to talk over here. Whatevs. So I've been working for Robbie since last fall. I was super lucky to fall into a cooking job. I love making food, like, above all else.

My mom, who happens to be the mayor of South Lick, Indiana where we live, really wanted me to go to college after high school. But I was so not into that, you know? Robbie had hired an assistant for her new breakfast and lunch restaurant - and it's super cool, in an old country store she fixed up herself - but the jerk quit before opening day. When I saw Robbie's Craigslist ad, I was all over it and she hired me on the spot.

Usually I'm the one who comes up with the special of the day. Me and Robbie and our other cook, Turner, we alternate cooking, busing tables, taking orders, and cleaning up. Robbie's like really good at doing as much grunt work as we do.

But I'll tell ya, somehow she keeps getting mixed up in these murders. It's kinda creepy, but it turns out she's good at solving them. I keep hoping some of that will rub off on me. Being a cook AND a PI? What an awesome life that would be.

Hey, catch ya later. Stay cool, dudes and girls.
Oh, wait! I was supposed to ask you a question, and tell you that one person who answers will win a, like, early copy of the next book, Biscuits and Slashed Browns. (Doesn't that name just give you the shivers? It does me.) So let's see. I know! Who do you think should play me in the movie version of the series? On second thought, forget it. I doubt they'd find an actress to play me - nearly six feet tall with red dreadlocks to my butt, kinda like the girl in this picture? Yeah. No.

So who should play Robbie? She's like five four, with black curly hair, has really strong legs, kind of curvy in her hips. Not skinny, but not fat, either. Fun!

So put your answers in the Comments and I'll see if I can help the author pick the winner tomorrow. Make sure you include your email address so she can reach you (yeah, I  know, that's so dinosaurish, but hey, it works).

Maxwell is President of Sisters in Crime New England. She lives north of Boston with her beau and three cats, and blogs here, with the other Wicked Cozy Authors, and with the Midnight Ink Writers. You can find her on Facebook, twitter, Pinterest, and at her web site, edithmaxwell.com.
Submitted by Edith Maxwell