It's Great to be a Dog

It’s great to be a dog whose human owns a pet shop. There’s always an abundance of the most delicious treats, and I play with the best toys. I have my own posh comfy bed in Mel’s office, and a fabulous dog sofa next to the big window where I can take a relaxing afternoon nap in the sun. My days are filled with people telling me how sweet I am, belly rubs, and the best behind-the-ear scratches. 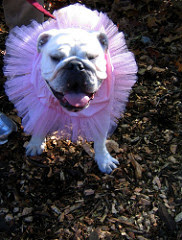 On the days I don’t go to the shop, Mel brings home something extra special. Last week she brought home the best un-birthday peanut butter cake just for me. I think she misses me when I’m not around.

It’s not all rainbows and unicorns though (I’m not exactly sure what the means, but I heard Betty Foxx say it when she was having a bad day). The downside is sometimes you’re the guinea pig for ugly sweaters, tutus, and girly dresses. Ugh! I’m a bulldog, not a doll.

It’s especially bad this time of year—Halloween. Pet costumes are flying off the shelves, and some of them are ridiculous. The most popular are the pumpkin and hot dog. I don't get it. Why would anyone want to be anything but a bulldog? I sure hope Mel doesn’t cave and dress me in Betty’s suggestion...a CAT! I think I’ll hide in the office until Halloween is over.

Oh, before I go, I’m supposed to tell you that Barking with the Stars, book nine, will be released this November. Hey, that’s next month! I bet Caro stops by next time to tell you all about it.

Sparkle Abbey is the pseudonym of two mystery authors (Mary Lee Woods and Anita Carter). They are friends and neighbors as well as co-writers of the Pampered Pets Mystery Series. The pen name was created by combining the names of their rescue pets--Sparkle (Mary Lee's cat) and Abbey (Anita's dog). If you want to make sure you're up on all the Sparkle Abbey news, stop by their website and sign up for Sparkle Abbey's Newsletter.