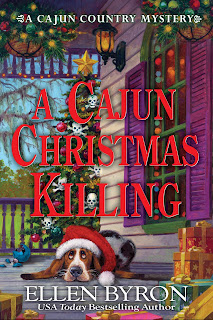 from the Cajun Country Mysteries
by Ellen Byron

I never miss a chance to visit New Orleans from my home at Crozat Plantation B&B – especially around Christmas. Colorful any time of year, the city truly sparkles at the holiday. Tiny white lights draped around Canal Street lampposts, sparkling decorations hung from the antique wrought iron balconies of the French Quarter. But one thing I’ve never loved is the small-minded attitude of some of the Crescent City’s upper class residents. Like the Garden District’s Charbonnet family.


Adelaide Charbonnet, the family matriarch, is superior, racist, and anti-Semitic. Ironic, considering Steve Harmon, her murdered son-in-law was Jewish. Her son, Philip Charbonnet, is an arrogant lecher and opportunist. Daughter Emme is the most likeable member of the family, partially because she detests her mother and brother so much. But complicating matters with Emme is she’s obviously in love with her late husband’s driver and bodyguard, Dan Levy.


Still, if spending time in the Charbonnet’s elegant nineteenth-century mansion is what it takes to garner clues to Steve’s murder – who happened to have been a B&B guest, albeit the worst one ever – I’ll do it. I’ll try to hold my tongue when Adelaide lets go with one of her judgy, prejudiced pronouncements. I’ll deflect every time that creep Philip tries to put the moves on me simply because my family’s been in Louisiana so long it gives us some ridiculous social status he wants to glom onto. And I’ll subtly check out the relationship between Emme and Dan, who seems the only person in the household actually grieving the late Harmon, a ruthlessly successful businessman. I have to wonder if there’s some clandestine secret as to why Dan cares so much.


When this endless social call is over, I’ll escape to the French Quarter and relax with a Pimm’s Cup and bowl of jambalaya at one of my favorite Vieux Carre haunts like the Napoleon House or The Gumbo Shop. I’ll share details of the visit with my boyfriend – yes, that’s right, Philip Charbonnet, I have a boyfriend, so lay off! – Detective Bo Durand, and we’ll sift through the conversations for clues. And perhaps, lulled by drinks and the festive French Quarter atmosphere, Bo and I will take a break from sleuthing, retreat to the gorgeous Reveille New Orleans hotel, and take our relationship to the next level. But that will depend on whether or not we can get murder off our minds.


Readers, have you ever been to New Orleans? If so, did you have a favorite site or eatery? If not, what would be the first thing you’d do if you visited the city?