Have you met Lucille and Flo yet?  Lucille is a middle-aged Jersey housewife and Flo is her best friend and sidekick.  You can follow all their adventures in my Lucille Series--Confession Is Murder, Unholy Matrimony, Hit and Nun, A Room with a Pew and Cannoli To Die For.

The bell rang and I ran to answer it.  Frankie always tells me not to run, but I don’t want the person at the door to give up and go away.  Know what I mean?
I pulled the door open.  Flo was standing on the front step.  “Flo, are you ready?”
“Don’t I look ready?”  Flo said.
She was dressed in a sleek, all-black jumpsuit and black spike-heeled suede boots.
“You look like someone died,” I said, as Flo stepped into the foyer.
“It’s called Black Friday for a reason, Lucille.”
“Well the reason we’re going out at one o’clock in the morning to shop is to score one of them Tweet Me Bluebird dolls for little Lucy for Christmas.  You know how much Bernadette said she wanted one.”
“I know, and I’m ready.  I heard a big shipment was coming in tonight to Toys for Kids.”  Flo laced her fingers together and cracked her knuckles.  “We’ve got to be ready, Lucille.”
“I’m ready.  I’m ready.  Let’s go.”
It was cold out, and I shivered as I slid into the passenger seat of Flo’s Mustang.  I just hope we can get one of them dolls for little Lucy.  I don’t want no disappointments on Christmas morning.
Fortunately Jersey has got its share of malls so we headed toward the nearest Toys for Kids.
“Sheesh, Lucille, look at all the people.” Flo pointed toward the line snaking from the front door of Toys for Kids.  “We’ll never score one of those dolls.”
“Sure we will,” I said.  “Drive around toward the back of the store and the loading dock.”
“What are we going to do?”  Flo glanced at me.
“We’re going to hijack the truck.”
“Have you lost your mind, Lucille?”
“Listen.  We’ll stop the truck, entice the driver out and take over.  Pull the truck onto the loading dock and once we find one of them Tweet Me Bluebird dolls, we’ll grab it and take it to the cashier's counter.”
“That does sound exciting,” Flo said, checking her make-up in the rearview mirror.  “Let’s go for it.”
We sat in the parking lot until we saw the truck pulling in.  Then we jumped out of the car and ran toward it.
Flo knocked on the driver's side window.  “Yoo hoo.”
The driver rolled down his window.  “Yeah, lady?”
Flo posed with her hand on her hip.  “I’m having some trouble with my car.  I was wondering if you could help me?”  She batted her eyelashes.
The driver sighed, opened his door and followed Flo to where she’d left the Mustang.
I ran to the truck, glad I’d worn a pair of sensible shoes, not like them heels Flo was wearing.
I glanced over my shoulder, but Flo was keeping the driver occupied real good.  The driver had left his door open, so I figured I’d hop in.  I had a bit of trouble on account of the truck was up so high.  Finally, I managed to get into the seat.
I’d never driven a truck before but I’d been driving a car since my seventeenth birthday, which was, let’s face it, a long time ago.  How hard could it be, right?
I managed to get the truck in gear. I have to admit it kind of got away from me, and Flo and the driver had to jump out of the way, but I managed to get it into the loading bay.
Flo was running toward me while the driver stood there with his mouth hanging open.  We managed to get the door to the bay closed.  We were in the back of the truck, hunting for one of them Tweet Me Bluebird dolls for little Lucy when we heard sirens.
“We’ve got to get out of here, Lucille.”
“Give me another minute.  I’m sure they got one of them dolls here somewhere.”
“We can look for it later.”
“What do you mean later?”
“I mean the cops are coming, and the only way we’re getting out of here is if we take the whole truck with us.”  Flo looked at me.  “Do you want to drive?”
“Nah, you go ahead, Flo.  It’ll be faster on account of you have no respect for the speed limit.”
“Let’s go then.”
We busted out of there as fast as we could.  The driver came running after us, but couldn’t catch us on account of Flo had the gas pedal almost to the floor.
We abandoned the truck in the parking lot next door figuring the cops would find it pretty quick.  I mean, one of the commandments is thou shalt not steal, right?
In the end, I did manage to find one of them Tweet Me Bluebird dolls, and I’m going back to the store tomorrow to pay for it.  Meanwhile, we’re waiting till all the hubbub dies down and we can go back for Flo’s Mustang.
I’m freezing my butt off out here, hiding in some bushes, but it’ll be worth it.  Little Lucy is going to be so surprised on Christmas morning.

Did you go shopping on Black Friday?

In early December, be on the lookout for the fifth book in my Lucille series, Cannoli to Die For! 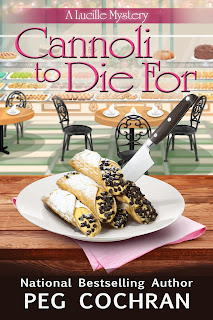 AND NOW FOR THE SEAON'S READING GIVEAWAY!

One reader who comments below will win:

Iced to Death - from my Gourmet De-Lite series
A Fatal Slip - from my Sweet Nothings Vintage Lingerie Series (as Meg London)
Berry the Hatchet - from my Cranberry Cove Series
No Farm, No Foul - from my Farmer's Daughter Series

Please leave a comment by midnight Tuesday, November 28 including your email address. US residents only, please.