Doing Favors Can Be RUFF! 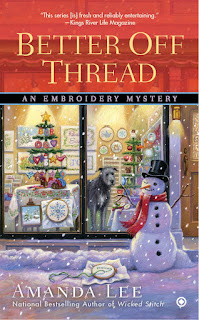 by Angus O'Ruff of Better Off Thread by Amanda Lee


*Sigh* I just can't do it. I can't in good conscience run around with reindeer antlers on my head. I realize Marcy is wearing an elf costume, but this is different.

You see, Marcy is doing a favor for Captain Moe. I like Captain Moe. I like him very much. For one thing, he gives me cheeseburgers--no veggies, just meat, cheese, and bun, just the way I like them. But I was a little put out about how this Angus-as-a-reindeer thing came to be.

Captain Moe comes over to the house and asks Marcy to be an elf. And then somebody--I don't know who because I was outside securing the perimeter at the time--suggested that I act as Santa's reindeer. Um...no. I'll be delighted to act as Santa's dog, but I will not be a reindeer.

I'm from a proud family and a proud breed. Sure, I had a tough childhood--wound up in a puppy mill and then was rescued by Marcy--but my mom taught me about my heritage...about what it means to be an Irish wolfhound.

Our ancestors were war dogs. We dragged soldiers off horses and out of chariots. We helped our people survive by hunting large game. Marcy, my human mom, once read to me an article about seven Irish wolfhounds that were given to the Roman consul Aurelius. Aurelius said that all Rome viewed the dogs with wonder.

And now I'm expected to hold my head high and stroll into some fake North Pole as a reindeer? It's degrading, that's what it is.

Off they go! Yes!

Marcy tries this time. She does a better job. I have to use my paw to get them off this time.

"Well, young man, I suppose you'll be Santa's dog instead of his reindeer," says Captain Moe. "Is that all right?"

I offer my paw for a handshake.

Captain Moe laughs and then finishes up with a Ho, Ho, Ho!

I hear giggles. Little people giggles. My tail starts wagging as I turn to look. And there they are! Little people! And they're gasping and calling to me. "Puppy!" "Doggie!" They're even more excited to see me than they are to see Captain Moe and Marcy. But don't tell them that. I wouldn't hurt their feelings for anything in the world.

Whoever said doing a favor for a friend was a drag? This is going to be great!
Submitted by Gayle