Time to start thinking about Christmas shopping. And what makes a better gift than a book?  Here are the new releases for November from members of Killer Characters. 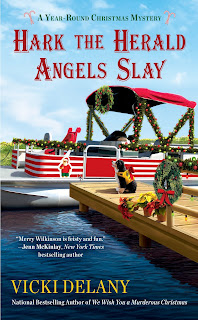 Santa’s summer vacation plans turn deadly in this festive mystery from the author of Rest Ye Murdered Gentlemen and We Wish You a Murderous Christmas.

The town of Rudolph, New York, has the Christmas spirit all year long—but when homicide heats up a summer holiday, it’s up to shop owner Merry Wilkinson to wrap up the case.

In Rudolph, Christmas in July heralds Santa’s arrival by boat to begin his summer vacation at the lake, and Merry Wilkinson, owner of Mrs. Claus’s Treasures, is looking forward to a busy weekend. But she’s caught off guard when her ex-fiancé, Max Folger, unexpectedly arrives with a team from a lifestyle magazine wanting to do a feature on the July festivities.

It’s clear that Max’s visit has less to do with business and more to do with winning back Merry’s heart. Merry has too much on her plate to deal with an old flame, but when Max is found strangled to death in Mrs. Claus’s Treasures, she must find out who wanted him dead—and stop a killer from ruining the summer holiday cheer. 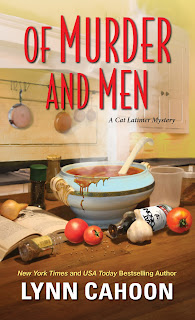 Love is in the air in Aspen Hills, and it’s making a terrible mess of Cat Latimer’s writers’ retreat—especially when blood stains the plot . . .

Ever since her business partner, Shauna, fell for a wealthy landowner in town, Cat has been working double time to keep her writers’ retreat running. And with the January session almost underway, that spells trouble. As if scheduling mishaps aren’t disastrous enough, Shauna skips out on kitchen duties one morning, forcing Cat to serve unsuspecting guests store-bought muffins . . .

But best laid plans really go awry when Shauna discovers her beau missing from their bed. When his body later turns up in the horse barn, they quickly find out the victim’s scandalous lifestyle left many dying for revenge. While balancing an eccentric group of aspiring writers and a suspect list for the record books, Cat soon finds herself on the heels of a killer—and authoring her most deadly conclusion yet . 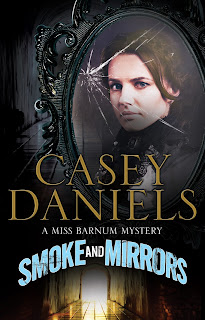 Evie Barnum is in charge of her brother’s museum, a place teeming with scientific specimens and “human prodigies” including a bearded woman and the lizard man. In this weird and whacky workplace, Evie hopes she can bury her secrets.

But when an old friend shows up and begs for her help, she does all she can to stay away. The next time she sees him, he is dead in front of the exhibit of the Feejee Mermaid. Suspicion for the murder falls on Jeffrey, known as the Lizard Man, but Evie knows it isn’t possible.

When Jeffrey also goes missing, Evie becomes determined to solve the mystery of her friend’s murder, even if it brings her face to face with her past… 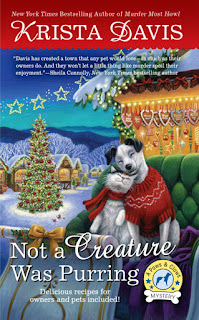 Inn owner Holly Miller finds it ruff staying cheerful over the holidays when the dead body of a beloved businessman turns up in the pet-friendly town of Wagtail, Virginia.

Inspired by her German heritage, Holly’s grandmother has arranged for Wagtail to have a Christkindl Market packed with goodies and decorations for the howliday tourists. But Holly’s mood takes an unseasonable turn when she learns that her old flame and childhood friend Holmes Richardson has brought his fiancée home—and she’ll be staying at the Sugar Maple Inn…

A love triangle becomes the last thing on Holly’s mind when her Jack Russell Trixie’s nose for trouble leads her to the corpse of a pet clothing tycoon. Now Holly and her dedicated detectives—Trixie and Twinkletoes the cat—must sniff out the killer to keep Christmas from going to the dogs… 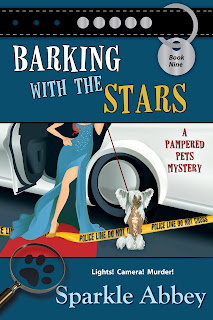 Lights! Camera! Murder!
It's a star-studded event and tongues are wagging. Laguna Beach, pet therapist Caro Lamont’s ex-husband Geoffrey is spreading rumors and snuggling up to the biggest stars, including Purple - the temperamental diva, who's the lynchpin of the celebrity line-up. All too soon, Caro is losing clients, her reputation, and patience with Geoffrey's shenanigans. More trouble is unleashed when the high-strung headliner is found dead and Geoffrey was seen leaving her hotel room. With a potential killer on the loose, Caro is hounded by questions about who had reason to want Purple out of the picture and though all the evidence points to her ex, Caro believes the police are on the wrong trail. Even if her sleuthing puts her in the doghouse with Detective Judd Malone, Caro must dig up the truth before the real killer gets away with murder.