A Christmas E-mail and a Giveaway

by Sully Sullivan of the Theater Cop Mysteries by J.A. Hennrikus

Sully here! Today I'm offering my post as a professional courtesy to Tom Flynn, with the Maine State Police, sent me this email, and I thought you'd all find it interesting. 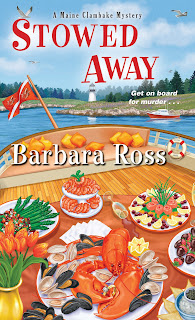 TO: Tom Flynn, plus 30 bccs
FROM: Tom Flynn
SUBJECT: CHRISTMAS GREETINGS TO THE FAMILY

Please excuse the group e-mail. Unfortunately, once again I won’t make it home to Providence for Christmas. My lieutenant has a wife and two kids, so he’s taking the holiday, which leaves me here to deal with whatever comes up.

First of all, Merry Christmas. I wish I could be there for the celebration. My nephews, Kyle and Lyndon, must be getting so big.

On the work side, I’ve had a busy year with the Maine State Police. The Major Crimes Unit investigates all homicides throughout the state, except in Bangor and Portland. This year out of 25 total homicides (so far), 10 have been in the Central Division where I work. Most are tragic domestic situations, easy to solve, but hard to deal with emotionally.

But we also had a couple of doozeys this year, including the murder of a billionaire on an enormous yacht in Busman’s Harbor. Since the victim was a recluse who never left boat, there were a limited number of suspects—the crew and a few people he’d allowed on board for a dinner party.

Unfortunately, my girlfriend, a brilliant chef, was a member of the crew, so I had to be excused from any formal role in the investigation. As you might guess, I was keenly interested in the outcome and managed to stay involved on an informal basis. The case took some shocking twists and turns, but we did push through to an unexpected resolution.

About the girlfriend… I had hopes this would be the holiday season I could tell you all that your long-time bachelor son, brother, nephew, cousin was finally settling down. I didn’t work out that way and I remain, as ever, unattached. So I continue to keep my head down and focus on work. And to visit the gym everyday. I call it my second home.

At this time of year, I get nostalgic about the big Christmases we had at Grammie and Grampa’s when I was a boy--the women in the kitchen preparing the delicious meal, the men watching the game and all us cousins running wild all around the house. I hope you have as good a Christmas this year at Mom and Dad’s. I wish I could be with you, but you all know why I left the Providence PD, and I think we all agree, it was for the best.

Raise a glass to me at the feast if you think of it.

It’s June in Busman’s Harbor, Maine, and Julia Snowden and her family are working hard to get their authentic Maine clambake business ready for summer. Preparations must be put on hold, however, when a mysterious yacht drops anchor in the harbor—and delivers an unexpected dose of murder . . .

When Julia’s old prep school rival Wyatt Jayne invites her to dinner on board her billionaire fiancé’s decked-out yacht, Julia arrives to find a sumptuous table set for two—and the yachtsman dead in his chair. Suspicion quickly falls on Wyatt, and Julia’s quest to dredge up the truth leads her into the murky private world of a mega-rich recluse who may not have been all that he seemed . . .

Stowed Away will be released on December 26, 2017. You can pre-order the book in paperback, ebook, or audiobook at Barnes & Noble, Amazon, Books A Million, Hudson Booksellers, Kobo, Apple, Google, and other fine retailers, including your local, independent bookstore. Read more about Stowed Away
Submitted by J.A. Hennrikus