A visit from Lori Briggs--and a cover reveal!

Lori Briggs here, taking time from my duties as the First Lady—of East Aurora, NY, anyway—to say a little about Liz McCall. And Ken Young, our chief of police.

See, Liz would be surprised to hear me say this, but I was really rooting for their fledgling relationship to work. After all, a good police department is very important, even to a sleepy village like ours, and it wouldn’t have hurt to see the chief plant a few roots by marrying a local.

(Yes, I may have been known to flirt with the chief, but that was nothing serious. After all, I am a married woman. Honestly, it was mostly just fun to watch him blush.)

When Ken and Liz seemed to hit it off, I was truly happy for both of them. Until…

Well, if you’re unaware of recent events (in Murder on the Toy Town Express) I’m not one to gossip. I will admit that I’m with most of the rest of the town to say that Marya coming back into Ken’s life was an unwelcome surprised. For Liz. And I think for Ken, too. Not quite sure what he sees in that Barbie wannabe, but I’m keeping an eye on it.

I suspect there’s more to her than you can see on the outside. Like one of those Russian matryoshka dolls. You crack that chick open, and I expect you’ll see a few different layers—each one more rotten than the last—and ones I’m going to bet she doesn’t want anyone to know about!

And I might just make it my New Year’s resolution to get to the bottom of it!

Look for DEATH OF A RUSSIAN DOLL, coming October 2018. 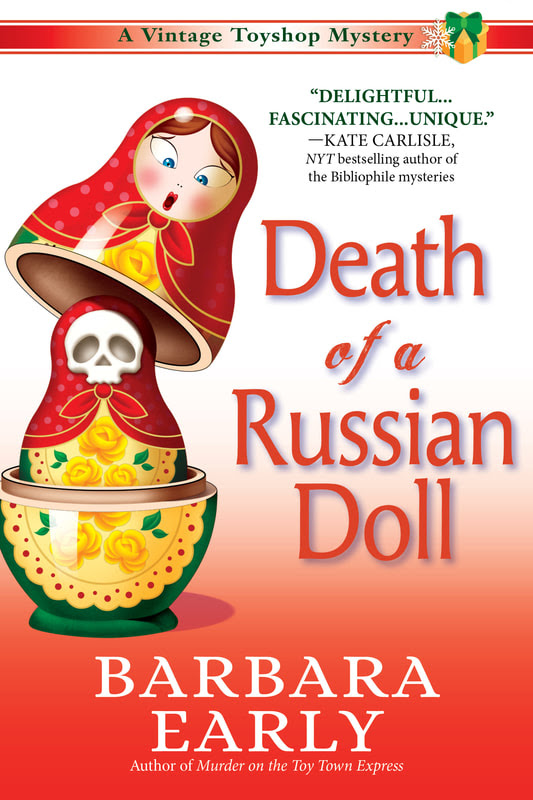