Thelma: We’d like to thank Killer Character for finally inviting us to be guest bloggers. I’m Thelma, one of Caro Lamont’s cats and my sister is – hey there, girlfriend, you’re on. 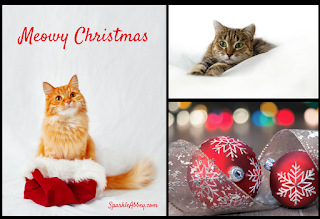 Louise: What? Oh, hello all. I was just taking a little nap waiting for it to be time. Hold on…

Thelma: She’ll be back. Every single time the poor thing wakes up she has to go check to make sure our bowls have food. She just can’t help herself  In the meantime, let me fill you in.

Here’s the deal, as you may know, our human mom is a pet therapist. (Not that we need therapy, of course, but there are some felines and canines who have…well, issues of some sort.

Louise: I’m back. Our food is good. But the water. The water’s old. I checked it and I’m not drinking that water. When Caro gets home we should let her know.

Thelma: Got it. Now, as I was just about to say, our human mom helps people and their pets but she also is a detective.

Louise: Oh, yes, a very good detective. Not like the kind with a badge but the one that helps the kind with the badge. You know, like Detective Malone. He's very nice.

Thelma: I’m not so sure about him. Sometimes, he acts like we’re not here at all. I clearly asked for him to rub my head and he looked at me like he had no idea what I was saying. Then he just went on talking to Caro. Seriously?

Louise: I see your point. Anyway, our human mom, Caro, helps Detective Malone quite a lot. In fact, she and her cousin, Mel, help the police with their murder investigations. Though, we haven’t seen Mel here for a while. I wondered what’s up with that. Anyway, the investigating is pretty exciting.

Thelma: It is exciting. So much so that people like reading about how the crimes as solved. If I could read, I might like to read about it too. As it is we have to find out about what’s going on from eavesdropping. You know, where we pretend we're not listening, but we are. Like just recently when Caro was involved with an event called Barking with the Stars to raise money for Warriors for the Paws. A good event to be sure, to raise money for therapy dogs for veterans who suffer from the effects of PTSD, That's post traumatic stress disorder, in case you didn't remember.

Louise: I did remember, but why dogs? Why not therapy cats?

Thelma: I don’t know. I think therapy cats would be awesome. But this group just does dogs I think. We can talk to Caro about it when she gets home. She’s bringing special treats. I saw her write it down on her list right after we told her about the ones we saw on TV.

Louise: And I see she got the boxes out with the shiny toys she hangs on that little tree for us every year about this time. That will be fun!

Thelma: Great fun! Let’s get a nap in so we can be ready, okay? Last year we weren’t able to remove all the toys from the tree. Right, Louise? Louise? Well, I see she’s already started on her nap.
So, let me say for both of us. Meowy Christmas and Happy Holidays to you and your furry family members. Also be sure to check out the fun Barking with the Stars giveaway from Caro and Dogbert, our canine housemate. 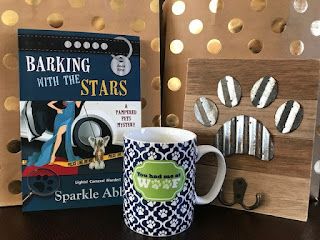 Have you read any of the Sparkle Abbey Pampered Pets books? Do you have a pampered pet at home?

Comment below with either the title of a Sparkle Abbey book or the name of your pet, to be entered in the drawing for the prize. (As you can see in the picture, it’s a fun leash hook and a “You had me a Woof” mug as well as a copy of Sparkle Abbey’s latest book, Barking with the Stars.)

Sparkle Abbey is actually two people, Mary Lee Woods and Anita Carter, who write the national best-selling Pampered Pets cozy mystery series. They are friends as well as neighbors so they often get together and plot ways to commit murder. (But don't tell the neighbors.) They love to hear from readers and can be found on Facebook, Twitter, and Pinterest, their favorite social media sites. Also, if you want to make sure you get updates, sign up for their newsletter via the SparkleAbbey.com website.