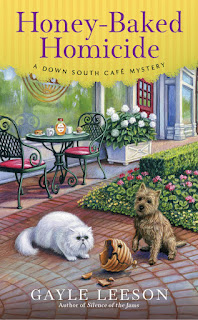 by Homer Pickens of HONEY-BAKED HOMICIDE by Gayle Leeson

Do you think I'm a mysterious man? Amy, Dilly Boyd, and one of the waitresses at the Down South Cafe were talking about Stu Landon this morning. Stu is a farmer who keeps beehives and has begun selling honey at the cafe. But that's not why they were discussing him. Well, that might be what made him the topic of conversation, but they were talking about him because--they said--he was mysterious.

What makes Stu Landon so mysterious, you ask? I wondered the same thing. They said it was because he kept to himself and didn't say much. I told them I keep to myself and asked if that made me mysterious. I don't think they ever did give me a straight answer.

I rather like the thought of being seen as a man of mystery too. But there are quite a few differences between Stu and me. Stu came here about twenty years or ago and moved onto the old Carter farm. I've lived here all my life. I lived with my mother until she passed. I inherited the house, but now it's just me. That living alone thing--that's something Stu and I have in common. Of course, Amy, Jackie, and Dilly all live alone, and none of them acted like there was anything mysterious about it.

Dilly did mention that many of the women tried to fix their daughters up with Stu Landon when he first showed up in Winter Garden and that he turned them all down flat. I dated in my younger days, but I've never had women throwing their daughters at me. Does that make Stu more mysterious than me?

Jackie, the waitress at the Down South Cafe--who's also Amy's cousin, by the way--said that her grandmother--Amy's Aunt Bess--has always said that Stu is a spy. Now I know as well as anyone that Bess can spin a yarn with the best of them. But I'm thinking that might be what makes Stu more mysterious than me. People don't know anything about his past. People know all about mine. I guess if I really want to be mysterious, I'll have to move to another town. But, heck, I don't want to do that. Who'd make me my ten-o'clock sausage biscuit?

What do you think? What makes someone mysterious?

Please leave a comment below with your name and email address to be entered to win one signed copy of HONEY-BAKED HOMICIDE and one copy of BETTER OFF THREAD! Winner will be chosen using a random number generator on Wednesday, December 13, 2017. Good luck!