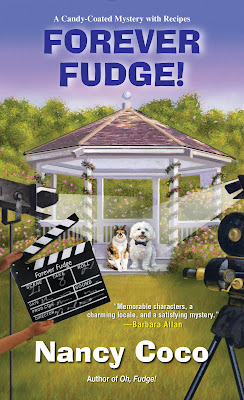 Isn't it cute? Hi, Allie McMurphy here. I love this cover, although I think Mal, my puppy, wishes she had a tiara on her head instead of a bow tie. Maybe she'd like some pearls or a pink bow as she is a bit of a girlie girl. It's sad when your dog is more girlie than you are.  All teasing aside, she is always happy to be on the cover. Carmella, my kitty, thinks she should have been on all the covers, but I told her she hadn't adopted us in the first couple of books.

My pets are sweet, sassy and smart and help me so much when trouble comes to Mackinac Island, Michigan.

One of the most famous things about Mackinac Island, besides the fudge and the Victorian cottages and the fact that we don't have cars on the island is they filmed the movie, "Somewhere in Time" here. Recognize the gazebo? It's currently at the Governor's mansion and available for rent. 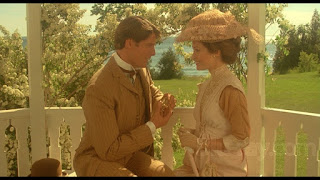 Well, now a couple of Hollywood producers have the great idea to return to the island to shoot a new television series. The whole island is a buzz with gossip about being on TV. There is a silly competition to see which side of Main Street will be chosen as the main backdrop for the outside scenes of the pilot. They even think an auction of the film rights would help stir up the economy. As for me, I'm staying out of it. I'd rather save my money to build a new roof top deck for next season's events.

That is until Mal sniffs out a real murder in the alley behind the Historic McMurphy Hotel and Fudge Shop. It's a man shot in the head and holding a note. In the note, the killer is challenging me to catch them before they kill again.

To complicate matters, Hollywood heartthrob, Dirk Benjamin, shows up at the crime scene. He's playing the lead role in the pilot-that of the local cop who solves murders. Now he's shadowing Officer Rex Manning to see how cases really get solved. Except that Dirk doesn't have the stomach for a real investigation and things get really sticky from here.

Want a chance to win a copy of one of the Candy-coated mystery books currently out? Leave a comment telling me if you've seen the movie and where your favorite gazebo is.