How Did I Get Into This? 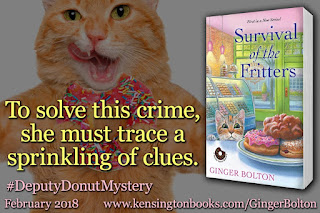 by Emily Westhill from Survival of the Fritters by Ginger Bolton

It all started with donuts. I like making them. The police officers at the Fallingbrook Police Department like eating them. Somehow, I started making birthday cakes out of stacked-up donuts for kids' birthday parties, and the next thing I knew, I was owning a donut and coffee shop along with my father-in-law, Tom. He had  retired as Fallingbrook's police chief.

Since we're only a few blocks from the police station, it's not surprising that police officers come to our shop, Deputy Donut, for their breaks. Other people flock in, too, and it was a real shock when Georgia, one of my favorite customers, was murdered.

I did not mean to tamper with the crime scene. I know better. My late husband was a detective, I worked for awhile as a 911 operator, and one of my best friends is a cop. All I can say in my defense is that I hoped I could save Georgia.

And then, thanks to my cat, who is also named Deputy Donut (she had the name first), I ended up in more of a tangled mess than I could have foreseen.

If Dep could only speak, we'd have solved the crime a lot sooner than we did. I say "we" because I ended up being instrumental in solving it.I can pick up a lot of clues while going from table to table serving delicious donuts and fritters and pouring rich and satisfying coffees and teas...

If you had to create a kids' birthday cake out of donuts, what would you make? The easy one (for me) is a rocket ship. Comment below for a chance to win a copy of Survival of the Fritters. 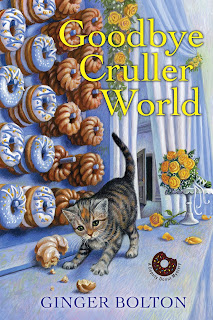 Goodbye Cruller World, the second Deputy Donut Mystery, will be on store shelves in September 2018 and can be pre-ordered now.