Meet Poppa and a Giveaway!

I’m not your typical character. I was the sheriff of my small town of Cottonwood, Kentucky for longer than I count. But that don’t matter now. What matters is that my granddaughter, Kendrick Lowry- Kenni Bug for short, was elected to sheriff in Cottonwood. You see, I’m dead. I died of a massive heart attack before she was elected, so I made it my ever-after mission to keep her safe. I’ve been busy! I’ve been scaring off any would be criminals for the past two years. It wasn’t until recently that I realized I couldn’t be in two places at once when someone killed Doc Walton and broke into White’s Jewelry. So when I showed up at Kenni Bug’s house in my ghost form, she didn’t take it so well. Needless to say, I ain’t leaving and since Deputy Lonnie Lemer retired, Kenni Bug needs a new deputy. Might as well be me.

1. How did you first meet your writer? Tonya was watching Longmire and she thought it would be cool to have a girl sheriff. Of course I knew it would be a lot more fun if she included me, so I tiptoed into Tonya’s head and the rest is history.

2. Want to dish about him/her? Awe, I like Tonya well enough. She’s got a lot going on in that head of hers so I have to push people out of the way to get my story told.

3. Did you ever think that your life would end up being in a book? No! I am a simple man from a small town. I like to stop and talk to everyone at the Cowboy’s Catfish diner, play a little craps down on the river and maybe sip a beer or two. Simple man.

4. Tell us about your favorite scene in the book. I love when Kenni Bug first realizes that I’m there and ready to help her. You know I can just ghost right on through a wall and see things people on the outside can’t.

5. Did you have a hard time convincing your author to write any particular scenes for you? Nah. Tonya listens and if she doesn’t listen to me, then I can make sure she writes herself into a corner so it forces her to go back and fix it.

6. What do you like to do when you are not being actively read somewhere? I like to sit in Kenni Bug’s back yard with Duke, her dog that I bought her and play fetch with him.

7. What are you most afraid of? I’m afraid my Kenni Bug is going to get into a situation I can’t help her with. Her heart! There’s this young man, Finn Vincent, from the Kentucky State Reserve that has been sent in to help Kenni Bug and he is a big talker. I can see it in her eyes just like I saw it in her mama’s eyes before she married Kenni’s daddy.

8. Describe the town where you live. Cottonwood is a place you can walk down the street and wave to anyone coming by. We like to stop and ask about family. We look out for each other. We might have some difference, but in hard times we come together. We don’t have any of those fancy stores. Just some, home-grown shops along with some really good diners. Now don’t mind the Auxiliary women. They are a bit nosy so they will question you without a care in the world.

9. Will you encourage your author to write a sequel? Will I? She is! She’s got a ten book contract and it’s only getting better from here!


Six Feet Under by Tonya Kappes is the four book in the  Kenni Lowry Mystery Series. 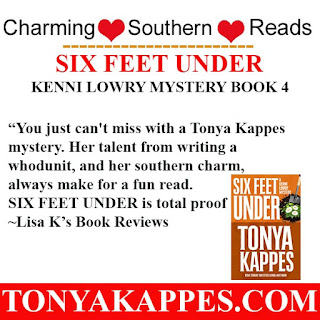 Too many cooks in the kitchen spoil the broth. And let me tell you, this broth is in trouble. Get ready for a Southern showdown.

The residents of Cottonwood, Kentucky are sent into a tizzy when the Culinary Channel comes to town to film an episode of Southern Home Cookin’ with celebrity chef Frank Von Lee.

Especially Sheriff Kenni Lowry.
Her mama’s award-winning chicken pot pie is what brought Frank to town, and they don’t make hair in the South bigger than her mama’s ego after the news.

When Frank Von Lee is found dead from food poisoning and the most likely culprit is Mama’s chicken pot pie, Kenni’s poppa, the former sheriff, comes back from the Great Beyond to assist in the investigation.

But nothing’s prepared Kenni for such a personal tie to a case, and she finds herself pushing the limits of the laws she’s sworn to protect.

This book’s so delicious it’ll make your mouth water and leave you hankerin’ for more. 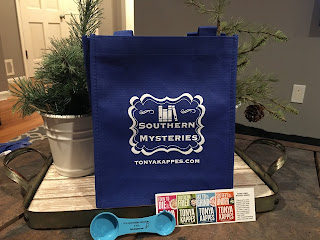 Do you like to buy books on their release day or do you preorder?
Leave a comment to be entered to win this fun IT'S A SOUTHERN MYSTERY, Y'ALL TOTE AND MEASURING SPOON!

I'll pick a winner on Friday!