Here are the new releases for April from Killer Characters 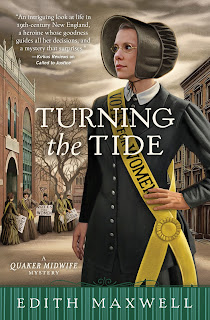 Excitement runs high during Presidential election week in 1888. The Woman Suffrage Association plans a demonstration and movement leader Elizabeth Cady Stanton comes to town to rally the troops. When Quaker midwife Rose Carroll finds the body of the group's local organizer the next morning, she can't help but wonder who could have committed the murder.

Rose quickly discovers several people who have motives. The victim had planned to leave her controlling husband, and a recent promotion had cost a male colleague his job. She had also recently spurned a fellow suffragist's affections. After Rose's own life is threatened, identifying the killer takes on a personal sense of urgency. 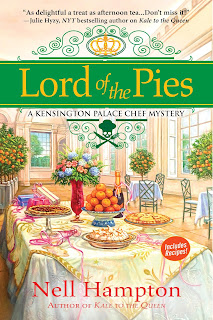 Nell Hampton (Nancy J Parra)
Lord of the Pies
Book 2 of the Kensington Palace Chef Mystery Series
Crooked Lane
ISBN-10: 1683315596
When Carrie Ann Cole bakes a lemon meringue pie to die for that actually kills someone, she must find out who the real killer is before her time at the Kensington Palace expires.

The elegant Orangery at Kensington Palace is the perfect setting for the bridal shower of Carrie Ann Cole’s best friend’s sister. Personal chef to the royal family, Carrie Ann’s pie theme is naturally winning. But a waiter later keels over dead into the lemon meringue pie she leaves as a thank-you to the staff and Carrie Ann realizes that somebody slipped a mickey into that meringue.

Her floury fingerprints are all over that pie and the authorities suspect her distress is a cover-up for murder. Carrie Ann must set out to clear her name if she wants to stay at her dream job any longer. But all too soon, another body drops in the Orangery. This time, it’s the Orangery chef.
Murder won’t crimp her style, and as bodies pile up, Carrie Ann uncovers palace intrigue, London nightlife, and British pies scouring for the killer in Lord of the Pies, the witty follow-up to Nell Hampton’s Kale to the Queen. 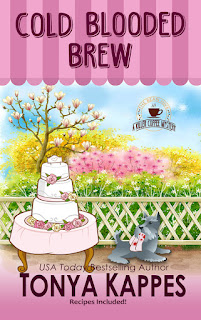 Meet Roxanne Bloom, ex-lawyer and who likes to be called Roxy by her close friends. She's the owner and operator of The Bean Hive coffee shop in Honey Springs. Kentucky.

But when a dead body is dumped on her doorstep like a sack of coffee beans, the cozy coffee shop becomes an all-out crime scene and everyone in the small town is hankering for some good gossip.

Sheriff Spencer warns her to be careful because everyone is a suspect. Roxy's snooping lawyer skills are on alert and she can't help but brew up a few clues to help find the cold blooded killer.