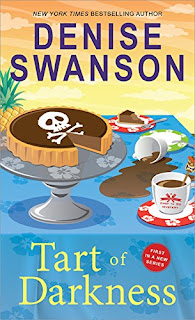 Leave a comment for a chance to win a signed book from one of my series.

Hi! Some of you might remember me from my brief time living in Scumble River. Back then, I was undercover as a motorcycle gang member name Tin Man or Tin for short. The chief of police wandered into my sting and I had to wrap up the operation a lot quicker than I had planned.

Meeting Chief Boyd and his cute wife, Skye changed me. After a lot of soul searching, I realized that if I wanted to have any kind of life, it was time to stop participating in covert operations for the agency that employed me (I’m not allowed to name it) and find some other way to contribute to society.

As it turned out, my change of career was too late to save my marriage—it was a goner from before the ink was dry on the license—but at least I did save my sanity. That is until my niece Ivy and her friend Dani Sloan entered the picture.

Because my new job was head of security at Normalton University, my brother and sister-in-law asked me to keep an eye on Ivy. Ivy may be a genius, but due to a double promotion in elementary school, she is much younger, consequently a lot more naïve than her college classmates. After she and her two best friends Tippi and Starr got kicked out of their apartment and went to live with her old neighbor Dani Sloan my new peaceful world went all to hell.

Dani inherited an old mansion that had been in the process of being turned into a bed and breakfast, but instead of running the place as a B&B, she decided to start a culinary company called Chef-to-Go.  She agreed that Ivy, Starr, and Tippi could rent rooms from her if they were willing to work for her business.

Originally, this all sounded like a good idea to me. The girls would have some adult supervision and working never hurt anyone. But then, one of Dani’s first catering clients was murdered and a crooked cop was determined to convict her, or one of her employees, for the crime.

Which is when, I had to step in and offer my help. I’m going to do everything in my power to help Dani figure out the identity of the real killer. And not just because the chemistry between us is off the charts. Both of us have too much baggage to act on the attraction, but that doesn’t mean that I’m willing to see her go to prison for a crime she didn’t commit.