New Cozy Releases for May 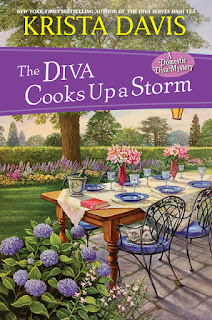 Domestic diva Sophie Winston can whip up an elaborate event in her sleep, but as the hippest hostess she rarely gets to enjoy the full guest treatment. Which is why her best friend Nina Reid Norwood loops her in to the latest culinary craze: a pop-up gourmet dinner party. The celebrity chef, the epicurean menu, and the high-profile attendees are all a surprise, turning the decadent dining experience into the hottest ticket in Old Town. But Sophie’s just pleased as punch that she finally has an opportunity to join her fellow foodies in some fun.

The posh party proves to be a recipe for disaster when Hollis Haberman sours spirits by bringing his own hot new dish—his young trophy wife. With Hollis’s son and ex-wife in attendance, there may be more heat at the table than in the kitchen. But by aperitifs, Sophie discovers Hollis swallowing his last bits of air, and she must scramble to stop a killer before the swanky supper becomes anyone else’s last meal. 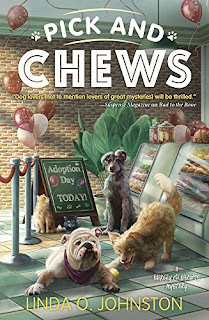 Linda O. Johnston
Pick and Chews
Number 4 in the Barkery & Biscuits Mysteries
Midnight Ink
ISBN:  978-0738752457
Carrie Kennersly tries to help her veterinarian boyfriend when he’s under suspicion of murder...Is he a keeper, or should she let him go off-leash for good?

As a technician for a local vet and the owner of the Barkery & Biscuits dog bakery, Carrie Kennersly is excited to host a rescue animal adoption event. She’s also excited to be in a relationship with veterinarian Dr. Reed Storme, despite his pleas for her to butt out of the murder cases she keeps finding herself involved with. Yet when Reed is accused of killing his former veterinary colleague, he seems a lot more agreeable to having amateur detective Carrie butt back in. Can Carrie clear Reed, or does she care too much for a killer? 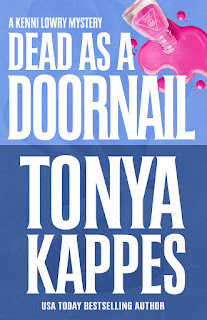 Beauty is skin deep, but ugly goes clear to the bone. And doesn’t our Sheriff Kenni Lowry know that? Well, she knows a lot of things.

Lucy Lowell takes great pride in writing negative reviews in the local newspaper for anything that does not go her way. When Lucy is found dead, it appears to be from natural causes.

But Sheriff Kenni Lowry knows there is more to it because the ghost of her grandfather, the ex-sheriff, is standing over the body.

His presence can only mean one thing: Murder!

Since Kenni’s relationship with Deputy Finn Vincent has heated up, Kenni is having trouble conducting the investigation without Finn questioning her every move.

Can Kenni unravel the mystery on her own or will she have to tell Finn the real reason she knows it was murder—the ghost of her poppa?

It’s blowin’ up a storm and only Kenni knows how it’ll end. 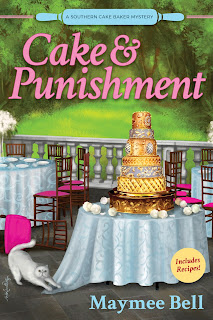 In the first of a delectable new Southern-set baking cozy series, Sophia Cummings, pastry chef extraordinaire, must craft the perfect cake for an old friend’s wedding while sifting through the suspects in a murder.

Bucolic Rumford, Kentucky has glowing fields of bluegrass, a fine selection of bourbons, and now a professional pastry chef. Broken-hearted Sophia Cummings has come home from New York City. She’s not there a minute before she’s charmed into making her high school friend Charlotte’s wedding cake. The kitchen at the Rumford Country Club seems perfect until Chef Emile’s body is discovered, sprawled near the stove, a cast iron skillet on the floor close by.

With one look at the shiny, new frying pan, Sophia knows it’s not Emile’s. She offers her knowledge to Sheriff Carter and her talents to Evelyn, the manager, who needs an interim chef. The mood in the country club is grim: Emile’s peppery personality had burned members and staff alike. Sophia wonders which one of them burned him?