Time for a holiday celebration

By Jill Gardner of ROCKETS' DEAD GLARE by Lynn Cahoon 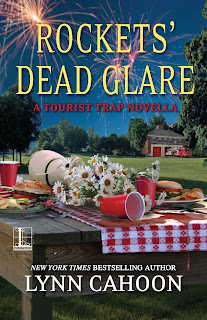 I know, I know. I don't call, I don't write, I just vanish off the face of the earth. But no matter what you think, I'm coming back soon. I know, everyone wants to know what is going on with Aunt Jackie. Believe me, I do too.

But today I thought I'd tell you a story from a couple of years ago. I don't think I've told anyone about it except the people who where there... ROCKETS' goes back in time a bit, but the good news is you get to know so much more about the town folk. I love  meeting new people.

So what's in Rockets' Dead glare? Piles of fun.

As sunny South Cove, California, gears up for their annual Fourth of July celebrations, a local murder threatens to kill the fireworks . . .

South Cove’s local businesses are up in arms after volunteer fire chief Barry Gleason threatens to shut down anyone who doesn’t comply with the fire code. But when Barry schedules a training burn in an old abandoned barn, he is the only one who doesn't come out alive. Jill Gardner—owner of Coffee, Books, and More—smells murder in the ashes. She’ll have to work quickly to nab a killer with a short fuse—or else everyone’s holiday will end with a fizzle . . .


Pre-order now.
And no, I won't tell you what's going on with Aunt Jackie.