It’s spring and thoughts of vacation are in the air. What do you need more on vacation than a great book?  And we have the perfect ones for you to put in your suitcase (or to read at home in the sunshine). 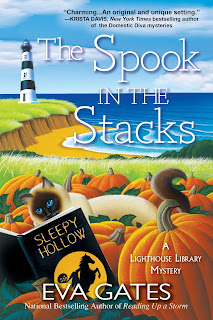 Wealthy businessman Jay Ruddle is considering donating his extensive collection of North Carolina historical documents to the Bodie Island Lighthouse Library, but the competition for the collection is fierce. Unfortunately, while the library is hosting a lecture on ghostly legends, Jay becomes one of the dearly departed in the rare books section. Now, it’s up to Lucy Richardson and her fellow librarians to bone up on their detective skills and discover who is responsible for this wicked Halloween homicide.

Meanwhile, very strange things are happening at the library―haunted horses are materializing in the marsh, the lights seem to have an eerie life of their own, and the tiny crew of a model ship appears to move around when no one is watching. Is Lucy at her wit’s end? Or can it be that the Bodie Island Lighthouse really is haunted?

With The Legend of Sleepy Hollow on everyone’s minds and ghoulish gossip on everyone’s lips, Lucy will need to separate the clues from the boos if she wants to crack this case without losing her head in The Spook in the Stacks, the delightful fourth in national bestseller Eva Gates’ Lighthouse Library mysteries 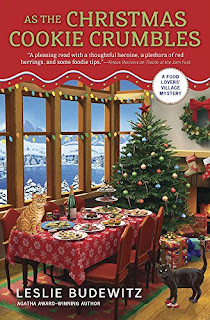 Erin Murphy, manager of a local foods market in Jewel Bay, Montana, investigates when a new friend is found dead, a string of Christmas lights around her neck. Erin is one smart cookie, but can she keep the holiday spirit—and herself—alive til Christmas? 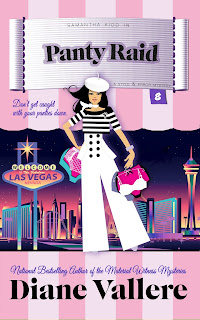 When amateur sleuth Samantha Kidd is assigned to cover the lingerie show in Las Vegas, her excitement is more visible than panty lines. Events in her hometown have made her a celebrity, and a romantic getaway with fiancé Nick Taylor is timely. But when a lingerie model—engaged to a college friend of Nick's—is found dead outside their hotel room, their escape turns brief. Cheeky designers, high class hookers, and secrets from Nick's past that don't add up make this gamble her most dangerous one yet. When push-up comes to shove, Samantha bares everything in order to save her future. 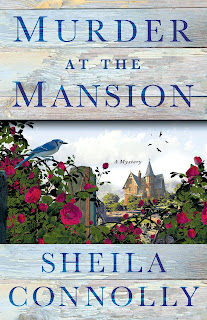 Katherine Hamilton’s goal in high school was to escape from her dead-end hometown of Asheford, Maryland. Fifteen years later she’s got a degree in hospitality management and a great job at a high-end boutique hotel in Baltimore. Until, that is, the hotel is acquired by a chain, and she’s laid off. When Kate’s high school best friend calls with a mysterious invitation to come talk with the town leaders of Asheford, she agrees to make the trip, curious about where this new opportunity might lead.

Once Kate arrives, the town council members reveal that their town is on the verge of going bankrupt, and they’ve decided that Kate’s skills and knowledge make her the perfect person to cure all their ills. The town has used its last available funds to buy the huge Victorian mansion just outside of town, hoping to use it to attract some of the tourists who travel to visit the nearby Civil War battle sites. Kate has less-than-fond memories of the mansion, for personal reasons, but to make matters worse, the only person who has presented a possible alternate plan is Cordelia Walker―Kate’s high school nemesis.

But a few days later, while touring the mansion, Kate stumbles over a body―and it’s none other than Cordelia. Kate finds herself juggling the murder investigation and her growing fascination with the old house, which itself is full of long-hidden mysteries. Kate must clear her name and save her town―before she ends up in hot water. 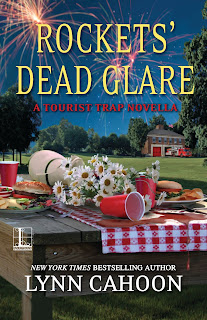 As sunny South Cove, California, gears up for their annual Fourth of July celebrations, a local murder threatens to kill the fireworks . . .

South Cove’s local businesses are up in arms after volunteer fire chief Barry Gleason threatens to shut down anyone who doesn’t comply with the fire code. But when Barry schedules a training burn in an old abandoned barn, he is the only one who doesn't come out alive. Jill Gardner—owner of Coffee, Books, and More—smells murder in the ashes. She’ll have to work quickly to nab a killer with a short fuse—or else everyone’s holiday will end with a fizzle . . . 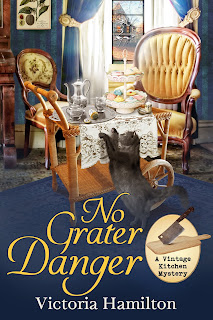 In the brand-new Vintage Kitchen Mystery from the author of Leave It to Cleaver, someone out to spice up their life means to crush a helpless victim . . .
“Delightfully entertaining, well-written, and an interesting and exciting plot. Literally keeps you guessing right to the end.” —Goodreads on Leave It to Cleaver

Vintage cookware enthusiast Jaymie Leighton is thrilled at the prospect of meeting an elderly descendant of her town’s founding father, not least because she’s known to possess an enviably large collection of antique spice graters. But the curmudgeonly woman also has substantial real estate holdings, and at the moment she’s engaged in a fierce battle with a property developer who wants her to sell off her old buildings in the name of progress. When Jaymie goes to visit the woman and discovers that there’s been an attempt on her life, she polishes up her sleuthing skills to find out who was behind the foul deed.

Her first instinct is to suspect the developer, but as she digs deeper into the case she learns that her older new friend has purportedly been the victim of numerous criminal acts—all of which point to different suspects. Unsure if the stories are true or simply the confused ramblings of a senior citizen, Jaymie sifts through the clues hoping to expose the culprit, but she knows that if she keeps stirring up trouble, she’ll be next on the would-be killer’s list.