Yes. You read the headline correctly. My name is Mae West, not the actress. It just so happened I married a man, Paul, last name West. He was a smidgen older than me, like thirty years. Some said I was a gold digger, but I wasn't. He was a wealthy business man that just so happened let me quit my job as a flight attendant and enjoy long days at the spa, mall, and our home in the Hamptons.

The closest thing to camping Paul ever took me was to the Ritz Carlton and even then we ordered room service.

Then...the FBI raid in the middle of the night made me think I shouldn't've stayed at the spa or the mall all day. Paul's little business ended up swindling millions of dollars out of people in a ponzi scheme. Everything was taken. . .everything but a campground. . .in Kentucky!

Neither sounded good to me.

Apparently, Paul had won a bet when he was in college. His winning was Happy Trails Campground. It was explained to me, Paul had put the campground deed in my name. It also came with a camper. No joke! Me driving a camper? 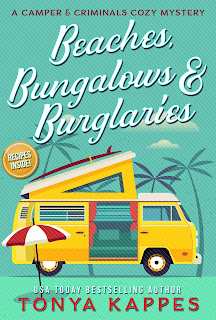 I wanted to refuse and keep my cute convertible, but that was seized too.

Long story short, I found myself driving to Kentucky in a big ole RV that I knew nothing about. On the way, I'd gotten into a mean fight with a toilet plunger and it didn't turn out to pretty. So, going to a campground where the brochure showed photos of the amazing Kentucky Bluegrass, the backdrop of the Daniel Boone National Park, and a crystal lake to dip my toes, started to sound like a semi vacation until my lawyer could find a buyer. 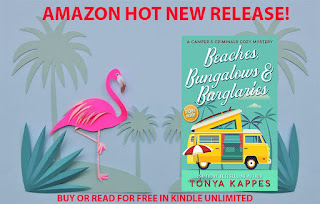 I finally made it to Kentucky and you could just imagine my surprise when the beautiful Kentucky bluegrass was brunt, there was a slime film on the lake and let's just say the copyright on the brochure was from the 60's!

And if that wasn't bad enough, Paul...remember him? Well, he broke out of prison and was floating in the Happy Trails Campground lake. . .DEAD! 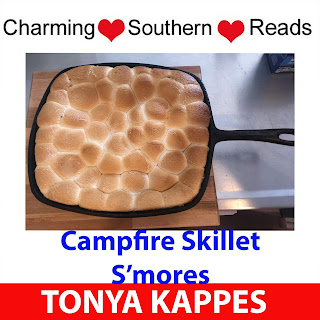 There are some amazing recipes and cleaning hacks in the back of the book! You can check out this amazing s'more dip that is the hit of any campground! Check out the recipe by clicking here!

BUY OR READ FOR FREE WITH KINDLE UNLIMITED 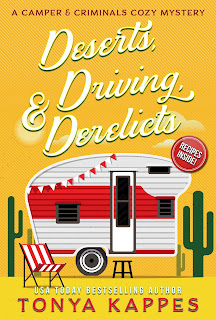 Leave a comment to be entered to win an IT'S A SOUTHERN MYSTERY, Y'ALL TOTE AND GOODIES! 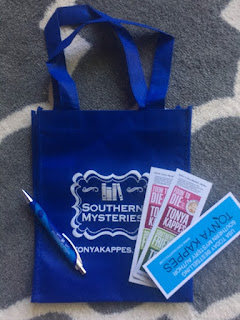 AND
the fun doesn't stop here at Killer Characters!
Head on over to Tonya Kappes Books Facebook page for weekly themes and a pinned giveaway on the page. Click here to join the fun!