by Ruth Clagan, from the Clock Shop Mystery series by Julianne Holmes 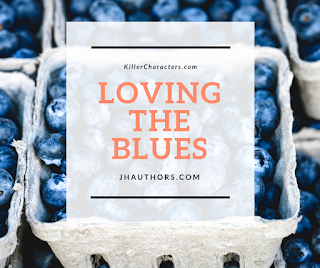 Much as I love the Fourth of July, and I do, that isn't my favorite thing about the first week of July. My favorite thing, my very favorite thing, is that blueberries are in season. Sure, during the winter I make due with imports and frozen. And earlier in the season, New Jersey will due. But when the blueberry wave hits New England--now that's a good time.

When I say I love blueberries, I mean I LOVE blueberries. In pie. In muffins. In smoothies. In ice cream. In bowls with a dollop of cream. Mixed in with plain yogurt. In parfaits. On salads. In a cobbler. In drinks--either as a juice, a garnish, or part of a syrup. Part tart, part sweet, all delicious. And in season? Abundant.

Many of my Maine friends love Blueberry Grunt, which is sort of a mix between a shortcake and a cobbler. Here's a recipe. Nancy Reed makes a fabulous grunt, but she isn't sharing her recipe and Caroline and I haven't been able to replicate it.

How about you, dear readers? Are you blueberry fans? Any favorite dishes? 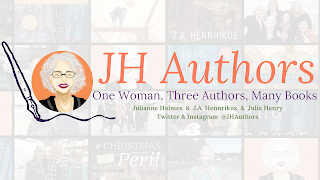 JHAuthors.com is the website for one woman who has three names. As Julianne Holmes, she writes the Clock Shop Mystery series. As J.A. Hennrikus, she writes the Theater Cop series. And in January, Julia Henry will debut the Garden Squad Series. She is on Instagram and Facebook as @JHAuthors. She also blogs with the WickedCozyAuthors.