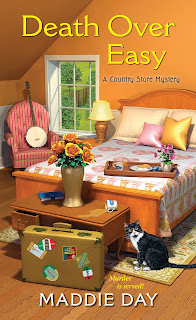 The author requested I let you know she's planning on sending one commenter here today an advance copy of of the book, so be sure you encode your email address after your contribution at the end. She would also appreciate pre-orders of the book from those who don't win.

I was assigned to the case when one of the many musicians at the Brown County Bluegrass Festival was murdered. The festival grounds are in the unincorporated town of Beanblossom. The county sheriff's office handles the investigation in such cases, and I'm their lead detective. Here's a snippet of a conversation a Ms. Robbie Jordan and I had in her restaurant after the murder"

“Detective, how was Pia killed? I know Isaac found her body, but was she shot? Poisoned? Stabbed?” Ms. Jordan paused in her assembly of the dry ingredients for pancake batter.

I tapped my hand on the end of the counter where I’d laid my tablet. “I hear you’ve acted as an amateur detective previously.”

“Not exactly. I simply kept getting drawn into murder cases.” She shrugged.

“I’ll tell you the method, but first I’d like your word that this time you won’t get ‘drawn in’ to my investigation.” I surrounded the words in finger quotes.

“Fine with me,” she said, but she didn't meet my gaze.

I wondered if it actually was. Fine with her, I mean. “Ms. Bianchi was choked. Garroted, actually.”

“You mean with a rope or something?” An involuntary shudder rippled through her.

“It was actually a metal wire. We’re looking into whether it was an instrument string, and if so, designed for which instrument.”

“Wow. With thousands of musicians in the county this week.”

For those wishing to enter the contest: Ms. Day would like to know which other mysteries you have read where the murder method was garrotage. Also, if you have been to a bluegrass festival, where was it, and if you listen to that genre of music, who is your favorite band? Don't forget your email address, and best of luck. Now it's back to the case for me.

Maxwell is President of Sisters in Crime New England. She lives north of Boston with her beau and two cats, and blogs here and with the other Wicked Cozy Authors. You can find her on Facebook, twitter, Pinterest, and at her web site, edithmaxwell.com.
Submitted by Edith Maxwell