Lovely to Meet You #Giveaway 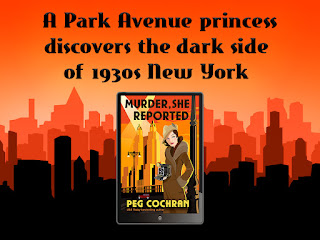 By Elizabeth Adams
From Peg Cochran’s Murder, She Reported Series

“Grab your hat, Biz, we’ve got a story,” Ralph Kaminsky said as he stuffed his notebook and stub of a pencil into his pocket.
I took my hat out of my desk drawer—a rather smart little number if I must say so myself—the new Robin Hood look in red felt with a black feather—plopped it on my head and secured it with a hat pin.  With any luck, I’d managed to get it on straight but there was no time to check—Kaminsky was already shrugging on his coat and heading toward the door.
“Where are we going?” I asked, trying to match Kaminsky’s long strides as we raced for the Lexington Avenue subway.
“Fifth Avenue and Sixty-eighth Street.  Some society dame claims she’s been robbed,” he said as we ran down the steps into the subway station.
I put my nickel in the slot and pushed my way through the turnstile.  The subway used to scare me—the way it rushed into the station with that blast of warm fetid air and the crowds of people pushing and jostling their way on.  I have to admit I’ve led a rather privileged life so far, rattling around New York City in taxis or chauffeur driven cars.
Kaminsky doesn’t know it, but my family has money.  Instead of taking photographs for the Daily Trumpet, if my mother had her way, I’d be spending my time planning dinner parties, putting together my trousseau and doing charity work.  But honestly the very thought bores me absolutely to tears.
So this is how I found myself rushing to a crime scene with a reporter who eats egg salad sandwiches with sliced onions for lunch and adjourns to the local bar for a shot of Old Schenley and a beer chaser every afternoon.
The doorman looked at us rather suspiciously even after Kaminsky showed him his press card, but he let us in and we made our way to the fifth floor.
Mrs. Dalyrumple’s apartment took up the whole floor.  We pushed open the door and stepped into the black and white marble tiled foyer.  A woman’s voice, hovering dangerously close to hysteria, came from further inside the apartment and a uniformed police officer hovered near the door.
The elevator dinged and a man in a trench coat got off.  There was an obvious air of authority about him, and I guessed he was a detective even before seeing the badge he carried in his hand.
He had dark hair with a slight curl and dark eyes that sparked with humor.  He noticed my camera and raised an eyebrow.
“From the press?” he said, extending his hand.  “Detective Sal Marino.”
His touch and the intensity of his gaze sent a thrill through me the likes of which I’d never experienced with any of the boys from my own set.
I had the feeling things were about to get very interesting.

Have you ever met anyone who swept you off your feet at first glance? 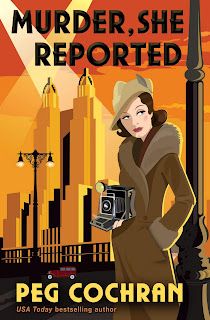 AND NOW FOR THE GIVEAWAY!

I'm giving away one copy (e-book only) of Murder, She Reported to someone who comments below (either Kindle version from Amazon or Nook version from Barnes & Noble)