Wishing You and Your Pets a Happy, Safe Fourth 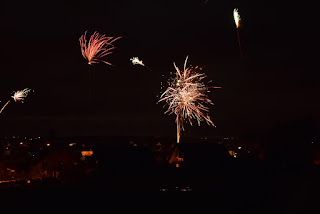 by Tally Holt
from Revenge Is Sweet, the first book in the upcoming Vintage Sweets series by Kaye George
(formerly known as Janet Cantrell, the Fat Cat author)

I never wanted a cat. I didn’t NOT want one, I just didn’t WANT one. Until my brother, Cole, dumped his with me. Not his, technically, but one that was left at his place by a girlfriend. One of the ever-increasing number of former girlfriends, that is.

How could I have foreseen what good buddies we would become? I gradually started telling Nigel, the huge gray and white Maine Coon, about my day, and my problems. He’s such a good listener, better than any boyfriend I’ve ever had. Not as good as my bestie, Yolanda, but she’s not always available, what with her complicated family problems, and her dates with the owner of the Bear Mountain Vinyeards.

Now that the Fourth of July is upon us, I need to pay attention to his needs. I imagine the fireworks will scare him, so I’ll make sure he feels safe. I know some dogs like to be cuddled, or even to wear a “thundershirt” when they hear loud noises. Maybe he’ll be worried about them too.

I also have to make extra sure he doesn’t get out during the fireworks. There are always terrified dogs who run away if they’re out during them. Sometimes they’re never found again, or get hit by cars.

It’s a day to have fun, but also to be extra mindful of all our pets!

photo from morguefile by Erean