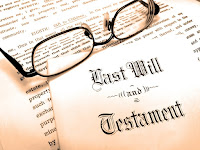 Then I, Jack Harding, am no longer on planet Earth.  I’m gone, dead as a doornail.  See, I figured someone might want to do me in.  Maybe a lot of someones.  That’s why I left a list of suspects for my lawyer.
I told him if I die from anything other than natural causes . . . wait, let me amend that.  Even if it appears I died from natural causes, be suspicious.  Insist on an autopsy.   Make sure of that, because I really doubt I’d be pushing up daisies anytime soon in the natural scheme of things.
So, I left a list to be opened upon my death.  A list of my enemies, numbered from 1 to 20.  Actually, there’s more.  But if anyone does do away with me, it’ll likely be one of those twenty people.

Let me explain -- numbers one through five are my law partners.  What, you say?  Why would any of them want to kill me?  Ha!  Because I’ve shown them up to be idiots, I’ve stolen clients away from them, or I’ve made sure they were kicked out of the firm at the very least, or better yet, disbarred.
There’s my sister too.  She hates my guts.  Too bad, I say.  She should have known better than to expect anything from me.

Then of course there’s my ex-wife.  Just about killed me to pay her off, but I’ll make sure she never enjoys my demise.  Have to remember to change the beneficiary on my life insurance too.
And maybe about thirteen or so others that probably think they’ve been wronged by me.  Frankly, I don’t care.  I don’t believe what all the ministers and priests say, there is no payback on the other side.  So why should I be worried?

But now if I am actually dead, then I want to know who my killer was!  Was it someone I overlooked?  Someone I never thought had it in for me?  Do you know who it is?  Life . . . and death . . . are just full of surprises, aren’t they?
You can read all about me in the newly released Tail of the Dragon and you can visit my author, Connie di Marco, at her website, at Facebook and Twitter @askzodia.  And don't forget to leave a comment to enter the very last day of our incredible Killer Characters' summer giveaway!!!