Theater Summer Is a Different Season

by Sully Sullivan
from A Christmas Peril by J.A. Hennrikus 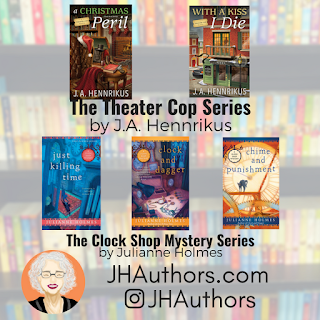 When you work in a summer theater, back to school has an entirely different meaning. It means your season is wrapping up, that you have a few short weeks to make your ticket selling goals, and that there's one more show to open and close. Summer theater is a marathon, not a sprint. No matter how much prep we do, or how ready we feel we are, there are the unexpected issues. This summer has included, in no particular order:


Soon, we'll be closed for the summer, and moving toward our annual A Christmas Carol. Boy, do I hope there aren't any dead bodies this year...

JHAuthors.com is the website for one woman who has three names. As Julianne Holmes, she writes the Clock Shop Mystery series. As J.A. Hennrikus, she writes the Theater Cop series. And in January, Julia Henry will debut the Garden Squad Series. She is on Instagram and Facebook as @JHAuthors. She also blogs with the WickedCozyAuthors.