The Spots Are Killing Me

by Sully Sullivan
from The Theater Cop series by J.A. Hennrikus 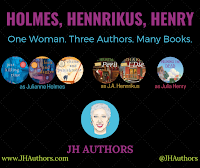 I used to be a cop, so I've seen my share of blood. Read blood. When I hung up my shield and decided to become the general manager of the Cliffside Theater Company I thought my blood days were over for the most part.

Then Dimitri decided to do Macbeth.

As a rule, I speak my mind. I don't not say words. I have been trying not to say "Macbeth" so folks don't send me outside, make me turn around three times, and then knock to be let back in. That has happened several times. It gets old really quickly.

As if the curse business wasn't bad enough, Macbeth has a lot of blood in it. A lot. Did you know that a lot of prop masters have their own secret recipes for fake blood? I didn't know that. Nor did I know that our beloved prop master had an extra special recipe that was mostly dish detergent, so it washed out easily. She's a great prop master, and is also seeing the wardrobe supervisor, so that may have played a part in her special blood recipe.

As I said, Macbeth has a lot of blood. So, we were running low. We had a particularly industrious yet dim (not a good combination) intern who took it upon himself to brew up some more blood. It looked great, but it didn't wash out easily. In some cases, it didn't wash out at all. He left out the detergent and added more paint. All of the whites are now pink, which really doesn't work with the concept of the show.

So, I've learned a lot about stage blood. Lady Macbeth's "Out, out damned spot" is my new motto.

Email ThisBlogThis!Share to TwitterShare to FacebookShare to Pinterest
Labels: @JHAuthors, A Christmas Peril, J.A. Hennrikus, Theater Cop Series, With A Kiss I Die