Lovely of you to drop in as the last of the autumnal sun is setting on the estate here at Chellingworth Hall. Draw closer to the fire, please. I’ll ring for Edward to bring tea – or would you prefer a sherry? Ah yes, me too. Sherry it is.

I relish the chance to discuss our local plans for celebrating Halloween. I know it’s become something of a fashionable thing to do these days, but it’s been marked hereabouts in Wales, and across all Celtic cultures, for thousands of years. Christians decided to re-create the pagan festival of Samhain as All Hallows Day, something they did with many pagan observances. 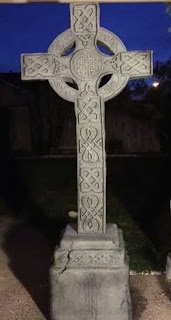 They chose November 1st, the day the Welsh marked the end of summer and the beginning of winter, to be the day when the dead would be remembered – suitable, I think, as Calan Gaeaf as it is in Welsh – was always a pretty somber affair, with those who lived off the land looking ahead to long, cold winter days, but at least having a day or two to rest after the harvest and the culling of the beasts for winter storage. 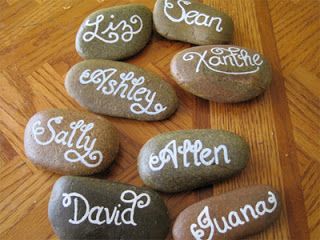 Masks were worn for Noson Calan Gaeaf – the night before November 1st – to ward off evil and, in a celebration called Coelcerth, children and women would dance around a fire – writing their names on stones which they placed in the flames. The children had to leave the fire before the flames died, for fear of being eaten by a terrifyingly grotesque sow called Yr Hwch Ddu Gwta, who roamed the countryside, accompanied by a headless woman. The children would chant, “Home, home, at once, The tailless black sow shall snatch the hindmost”, and they’d scatter to their homes. The next day the women and children would return to the ashes to see if all the stones with names on them were still there – any that had disappeared signified that person would die before the year was over. Delightfully grisly, don’t you think? And still marked across Wales, you know. 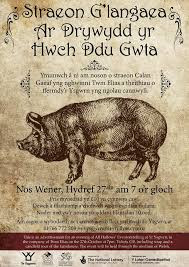 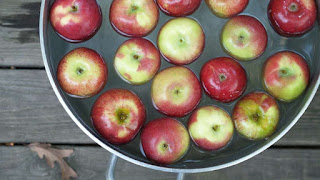 Other traditions involved apples – and that’s something that’s also been passed down to modern times. Bobbing for apples, or twco fala in Welsh, is an ancient way of divining how much luck you’d have the following year – the bigger the apple, the greater the good fortune, and girls would toss apple peel over their shoulders to see what letter was formed…which would be the initial of their husband.

There are many other traditions in these parts, but I think it’s fair to say only the main ones are still observed. Here? Oh yes, in the village of Anwen-by-Wye there are still those who won’t look into a mirror on October 31st for fear of seeing a hag or a demon, and when I first moved here – about sixty years ago – there were still girls in the village who would bake a mashed cake with nine ingredients, then walk backwards upstairs to bed, with their hands behind their back, knowing that they might dream of their future husband…or a coffin!

These days people carve the odd pumpkin, indeed, we’ve been growing them here on the estate to give to the local children who will be carving them in the village hall as a group activity, with the Sunday School leaders overseeing them – it’s funny how Christian and pagan rites are still so closely intertwined here, but I’m sure it’s not a bad thing...we all need to remember we have ancient roots, and are also stewards of the future.

Cathy Ace writes the WISE Enquiries Agency Mysteries (book #4 THE CASE OF THE UNSUITABLE SUITOR will be published in trade paperback on November 1st in the US/Canada), and the Cait Morgan Mysteries. Find out more about Cathy and her work, and sign up for her newsletter at http://cathyace.com/