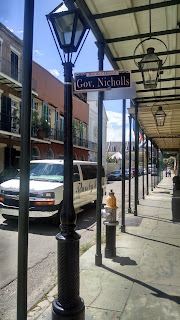 I am so excited to be visiting Killer Characters to tell you about my adventures in  GLITTER BOMB. My name is Carmela Bertrand and I own the Memory Mine Scrapbooking shop on Governor Nicholls Street in the French Quarter of New Orleans, which is the most vibrant place to live and work. And NOTHING is more exciting than Mardi Gras. Of course, sometimes it can get a little too exciting. There I was with my BFF Ava Gruiex, we were dancing, and getting ready to catch beads being thrown by the krewe of the first float in the Pluvius Parade. And what a float it was! Pluvius krewe members were hanging off the decks and swinging from the sails of a galleon ship of olden days. They were yelling and tossing golden beads by the hundreds at the roaring crowd that filled Royal Street from curb to building line. On the top deck a resplendent King Neptune sat on a golden throne. Streams of gold glitter propelled out of the prongs of his trident and shot high in the air before scattering over the float and the crowd. Ava pointed out my ex-husband waving from the float. Oh well, I could just ignore him.

Suddenly there was an explosion. The float rocked and rolled. A rumbling noise grew louder. The float toppled and what looked like a thousand pounds of glitter flew everywhere, burying the krewe members who'd been tossed off the float. And when the explosion was over, one by one, the krewe stood up and shook themselves off. Much as I didn’t like being married to Shamus Meecham, I was glad to see him standing, albeit shakily. Then, I watched him walk over to a body that was lying on the ground perfectly still and covered with so much glitter that it was impossible to tell who it was. Ava and I ran over. We brushed away the glitter and the man never moved.

Then I heard the sirens…Well the last thing I needed was to have my long time beau Detective Edgar Babcock find me at the scene. But there I was when he pulled up and he quickly discovered that my ex-husband was there as well. Let’s just say, Babcock isn’t always as cool as he pretends to be when he thinks I am paying too much attention to Shamus. And I had my fingers crossed that this wasn’t a murder because Babcock practically accuses me of being at every murder scene he responds to and, you know, that is patently false. Maybe most scenes, but certainly not all. 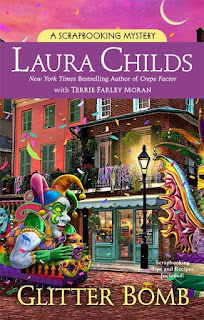 I’m sure you are dying to know what happened next, so we are giving away a copy of GLITTER BOMB to one lucky commenter below. Just say a word about Mardi Gras. Anything at all. Don’t forget to include your email addy in this format: name (AT) server (DOT) com to avoid the spam bots. Giveaway closes at midnight Sunday, October 21st.
Submitted by Terrie Farley Moran