Now, I’m no Sherlock Holmes, but as we all know he was a master of disguise.
I need to make a visit to the Cape Cod Yacht Club and poke around, find out what people there know about the recent murder in West London.  The problem is, I don’t want anyone knowing I am poking around.

Thus I will need a disguise.  Let’s see what I can do.

I didn’t want to be recognized. It’s not as hard, I have found, as some might think to dramatically change one’s appearance. People expect to see what they expect to see. A gray-blond wig, a pair of giant sunglasses, a bit of makeup to add lines to the edges of my mouth and nose, a silk scarf around the throat to hide the lack of loosening skin, the sort of clothes I’d normally never be caught dead in, shoes with higher heels than I ever wear, to add height, and a bit of padding to my chest and hips. All that, plus an upper-crust New York accent, and we have a wealthy, widowed lady in her well-preserved fifties recently moved to West London from Manhattan and hoping to join a yacht club for the social life. 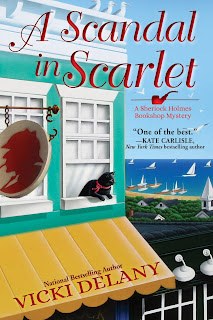 My disguise might make me look a bit plumper than is fashionable among wealthy East Coast women, but I can’t make myself look thinner than I am, nor can I become shorter, so I had to add weight and height.

A Scandal in Scarlet, by Vicki Delany

A Scandal in Scarlet is the fourth Sherlock Holmes Bookshop mystery from Crooked Lane. It will be released on November 13.  Vicki will be having giveaways and parties to celebrate on Facebook, so head over to www.facebook.com/evagatesauthor and ‘like’ the page to join in.