By Suzanne Dietz of EGGS ON ICE, a Cackleberry Club mystery by Laura Childs 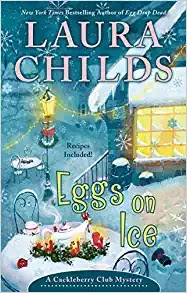 In the spirit of the season the Kindred Players were having a dress rehearsal for A Christmas Carol. Toni and I had decided that helping with costumes, lights and set designs was much more important that finishing the decorations at the Cackleberry Club Café. So there we were watching friends and neighbors transformed into 19th Century residents of England and speaking Dickensian lines with delicious accents.

We were particularly tickled that Allan Sharp, or as Toni calls him “our town curmudgeon” was playing the part of Ebenezer Scrooge. Talk about type casting. Still, he was doing a good job.

Toni had trouble with the lighting and for a minute the stage was completely dark, but she got control and made it light enough that we could just see Scrooge sitting at his desk. I was operating the smoke machine in anticipation of the ghost who showed up right on cue. He seemed to hug Scrooge for a moment and then floated off into the wings opposite us. It was so well done that I nearly jumped out of my skin when Bill Probst came up behind me and called my name. I was shocked to see him in a long gray ghost outfit. When he apologized for missing his cue, I was perplexed. Who was the ghost on stage? And why is Allen Sharp slumped at his desk, not moving? In fact it looked as though he wasn’t breathing.

I’m bursting to let you know what happens next, so we are giving away a copy of EGGS ON ICE to one lucky commenter below. Just tell us anything at all about amateur theatrical productions. You’ve been in a show; you were in the audience; you were a stage hand; you don’t spend money off-off Broadway. Whatever it is, tell us and you will be entered for a chance to win. Don’t forget to include your email addy in this format: name (AT) server (DOT) com to avoid the spam bots. No email; no entry. Giveaway closes at midnight your time Saturday, December 22nd .