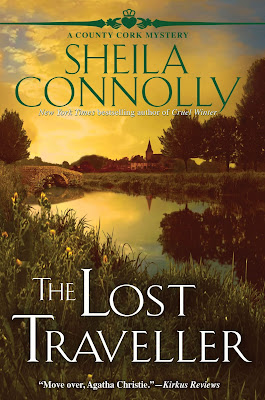 
from The Lost Traveller


You know, I’ve been in Ireland for over a year now, but I’ve been so busy that it’s hard to keep track of time. I can tell you that my pub, Sullivan's, is still in business (no thanks to my experience, which is pretty limited), my cottage is still standing, and now I’ve got friends of all ages.

But there’s a lot I haven’t seen yet, and until recently that included Travellers. What? Yeah, I know, and I’d never heard of them either. (See what I mean about not getting out of the pub?)

So of course I had to ask people just what they were, and as usual, Irish people were happy to explain it to me. Travellers are a kind of small group of nomadic people who travel around the country, mostly in motor homes (used to be pretty much in wooden carriages, but times have changed), and do odd jobs and deal in horses (buying and selling). But they don’t often stay long in one place, which explains the name.

Lots of people don’t like or trust them. They think they’re thieves or pickpockets, and lazy too. And they kind of look at them as foreigners, which is funny, because a couple of years ago DNA scientists proved they’re as Irish as anyone around. They just live differently, and have for a long time.

I don't have a lot of experience with Travellers (they don't hang out in pubs a lot) but it has been good. Other people may say they can’t be trusted, but they’ve been known to help out people in trouble, and they certainly look out for each other, like one big family that happens to live all over the country. Not because they want anything, but because it’s the right thing to do. That’s what happened recently, when a couple of kids (well, younger than me), Sophie and her brother Niall, arrived in Ireland after living with their parents in another country for years, and got themselves into trouble with a gang in Limerick. Yes, there are gangs in Ireland, but this was the first time I’d come across them here, though I knew a lot about them in Boston. I guess there’s not enough money (or drug-buyers, I hope!) in Leap to attract them.

But what I wanted to say was that there was a Traveller who helped Sophie and Niall get out of trouble. He didn’t ask for anything and he kind of quietly disappeared after the trouble was cleared up. But who knows? Since he’s a Traveller, he may be back again, and I’d be glad to see him.

for purchase information go to
www.sheilaconnolly.com