The Gardening Lull That is January

by Lilly Jayne, of the Garden Squad series by Julia Henry 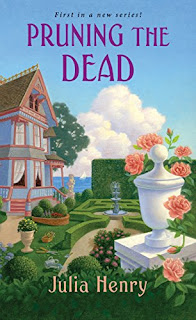 January is a difficult month for gardeners, especially if you live in the northern states, like Massachusetts. The glow of the holidays are past, and the long winter lays ahead. Now, I'm fortunate enough to have a greenhouse, so I do more than stare out the window at my frozen gardens. But it's not the same.

January S-T-R-E-T-C-H-E-S on and on. I've been known to force bulbs to see flowers. I work on succulent gardens, but my heart just isn't in it.

Over the past couple of years, I have done a few things that help a bit.

First of all, my friend Delia invested in a few of those bright light therapy screens, and makes sure I sit in front of them for a bit every day. I'm not sure if they help or not, but they seem to.

Secondly, I bring in some of my outdoor plants during the winter. It gets crowded in the library and in the greenhouse, but getting crowded by green is a joy.

Third, this year I decided to decorate the plants with holiday lights. My friend Ernie brought me over a couple of strands of LED lights, and the pop of color made me so happy. No one can see into the back of the house, and only my closest friends come into the library so I'm going to keep them on through the winter--until the days get longer, and I can start making plans to get outside.

I know I'll get back into my garden soon.