But How Could I Resist? By Kath Rutledge, from the Haunted Yarn Shop Mysteries, by Molly MacRae

If you know me, you know I love all things textile. So I can’t help pointing out that February is National Embroidery Month. In honor of that and the release of Crewel and Unusual (book 6 in our series) here’s what happened when Shirley and Mercy, the Spivey twins, stopped by the Weaver’s Cat the other day (never a good sign). Even worse, they know where my weaknesses lie. They came in to tell me about an embroidered table runner they saw.

“Embroidered with silk,” Mercy said. “The kind of thing our mama’s mama and her friends were so taken with and so good at.” 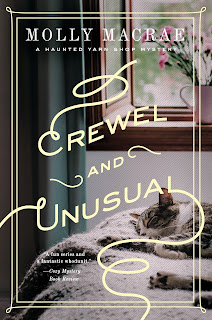 Shirley turned to Mercy. “Needle Painting, don’t they call it?”

“They do,” Mercy said, looking at me, not Shirley. “Isn’t that right?”

“Or Art Embroidery,” I said. “Or Kensington Embroidery or Art Needlework.”

“You’re so knowledgeable. It’s a blessing, I’m sure,” Shirley said.

“But it’s not often you see a genuine piece so large and in such good condition,” Mercy said. “You can almost smell the strawberries and the climbing roses. Stitched with single strands of silk thread—”

Shirley shushed her. “No more spoilers, in case we get her hopes up and then it sells before she has a chance to see it, and wouldn’t that be a terrible shame?”

I’d seen the kind of smile that broke onto her face then. I’d watched my good friend Joe land wily brook trout. Those trout never stood a chance. Neither did I. The familiar warmth and excitement grew in my chest as I listened to their back-and-forth about the beautiful piece of embroidery.

“Belinda’s there today,” Mercy said, “arranging her wares. Displaying them to best advantage. You know how important that is.”

“We told her that once you got wind of that table runner you’d want to see it,” Shirley said. “Easy enough to run over there on your lunch hour.”

“Offer authentication. It would be a little plus for her.”

“Whoa, wait,” I said. “Doesn’t she have that information?”

“She probably—” Shirley started to say.

“She does,” Mercy, and an elbow jab to Shirley's ribs, finished.

“Of course she does,” Shirley said, “but this would be the icing on the cake. It’ll be the sheen, dare I say the glow, on the silk.”

“Oh yes, the glow,” Mercy said. “And it isn’t just on the silk. The silk itself glows. Forty-eight inches long, eighteen wide, and the colors.” She put a hand to her heart. There was no questioning the sincerity of that gesture. I felt the echo of it in my own heart.

“And think how nice it’ll be for you two to meet, too,” Shirley said, “with so much in common. Something positive to counteract whatever Nervie Bales goes and turns into a shambles.” There was no doubting the sincerity of Shirley’s gesture, either.

Bringing up Nervie almost brought me out of my textile haze. But an Art Embroidery table runner that had the twins swooning? They might know how to lose friends and insult people, but they also knew embroidery. Their own work was lovely. So how could it hurt me to go take a look? Another way to put that was, how could I resist?

Now, for your National Embroidery Month pleasure, here are links to a couple of Pinterest boards:


And be sure to visit the AntiquePattern Library. It has thousands (thousands and thousands) of fabulous patterns—and you can download many of them. Pack a lunch, though, because you might be here for hours! 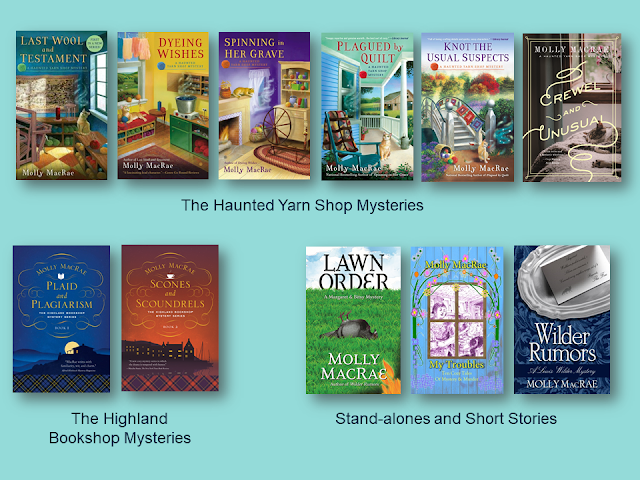