Convict to Victim. . . .From the eyes of Greaser Gadie,
MOTORHOMES, MAPS, & MURDER 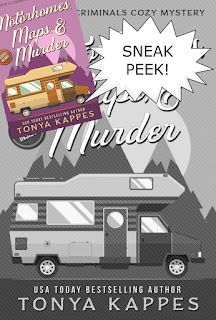 Here’s the situation. I had to get out of that prison. It was breaking my soul and the only person I knew to turn to was Brother Lester Hager, the preacher at the Normal Baptist Church in Normal, Kentucky.

I’m telling you, my soul was crushed. When Brother Lester and them church women came to talk to the prisoners, me included, I wasn’t sure about all that. After all, them bible beaters where spoutin’ off stories of redemption and love.

Then I got thinkin’. I’m redempted and I deserve love. When that pretty young thing got off that bus behind Brother Lester, I knew that she was the love I deserved. Her name was as pretty as her light brown hair and her crystal blue eyes. Julip Kaye Knox. She was smart too. She’s a map maker. There’s a fancy name for that. . . but anyways.

When she put her hand in the air to talk to some of the prisoners, I knew I had to be in her group. She came trotting into the communal area and my heart beat as fast as a turbo charged engine.

Week after week, I studied exactly what Julip had left for homework because I wanted her to notice me. The best day of my life was when the prison guard came in and told me I had a visitor. You couldn’t imagine my surprise when Julip was standing right there. Alone. And on a different day than then the normal group visit.

It was then that I came up with my brilliant plan to escape from prison. I just had to be with her outside of the bars. By the look on her face, I knew she was on board, and the most important part of my ticket out.

I wooed her for a few weeks and talked sad mouth to her about my conditions making it her idea for me to escape, which got her excited. She was the one who told me the secret about Preacher Lester Hager was keeping, but it was my idea on how to come up with the blackmail scheme.

The next time the bible beaters came to the prison, instead of getting into Julip’s group, I decided to go to Preacher Lester. During a moment of silence prayer, I whispered in his ear what I knew and if he brought me a few thousand dollars, an extra set of clothes, and a clear escape, then I’d keep my mouth shut.

It was a great idea until my ego got in the way. I’d escaped just like me and Lester planned, and it was on my way to Julip’s cabin in the woods, when lo and behold there was the Battle of Wildcat Reenactment taking place in the middle of the Daniel Boone National Park. This crazy lady in an exercise outfit and fanny pack, Queenie something or other was her name, gave me a civil war uniform and a bayonet, of all things, throwing me in the reenactment. Clearly, she thought I was someone else.

I figured I’d just pretend and play along while I made my way to the beginning of the trail using the maps Julip had made for me. After all, I didn’t want anyone to recognize me, Greaser Gadie, the escaped prisoner that all the law was looking for. But it was then that I noticed one of the jurors that help convict me and put me behind bars.

I recalled the last thing I said to him right before they hauled me off the prison, “I’m remembering your face because I’m going to come after you one day.” Now, at the time, those might’ve been just words. But when I saw his face, my blood boiled, and I knew I had to make good on my promise.

I made it look like part of the reenactment and that I stabbed a soldier from the other side. My luck would have it, there was another feller there that was on the jury and I had to make good on my promise one more time. . .

Until. . .someone recognized me. Down I went, to my demise. There were three dead, including me. But who killed me?

For years, USA Today bestselling author Tonya Kappes has been self-publishing her numerous mysteries with unprecedented success. She is famous not only for her hilarious plotlines and quirky characters, but her tremendous marketing efforts that have earned her thousands of followers and a devoted street team of fans. Be sure to check out Tonya’s website for upcoming events and news and to sign up for her newsletter! Tonyakappes.com