Working for a Living

I just love getting a new hat, don’t you?  There are some adorable felt fedoras for winter and sporty straw chapeaux for summer with colorful grosgrain ribbons.  My friend Irene works at Madame Louise’s Dress Shop designing and making hats.  She made a charming one for me.  It was quite dear at $3.00 but I simply had to have it.  I’ve gotten so many compliments on it.

Irene and I have been friends since we met in the hospital when we were both stricken with polio.  I was lucky—I only have a slight limp—but poor Irene has to wear braces on her legs.  I must say, she makes the best of it.

Unlike Irene, I don’t really have to work for a living—my family is quite well-off.  We live on Madison Avenue in New York City, and I made my debut at the Waldorf-Astoria Hotel with champagne toasts and the Kay Kyser Band playing.

But I love my job as a crime photographer for the Daily Trumpet.  I’ve paired up with Ralph Kaminsky, one of the crime reporters.  So far we’ve covered the story of a cheating husband who may or may not have murdered his wife; a poor maid found stabbed in a summer house in the Hamptons, my friend Gloria’s stepmother shot in the ladies room at the Waldorf-Astoria and a body found in Billy Rose’s Aquacade at the New York World’s Fair.  I wouldn’t trade it for anything.

I think working can be stimulating and challenging.  What sorts of jobs have you had? 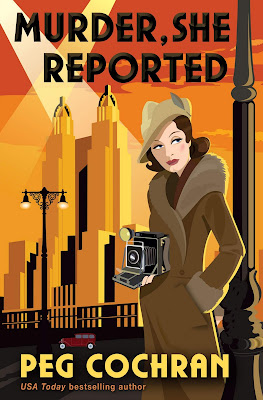 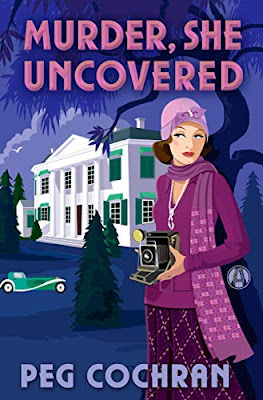 Email ThisBlogThis!Share to TwitterShare to FacebookShare to Pinterest
Labels: murder, Peg Cochran, She Reported, She Uncovered