You say Potato, I say Yum!

By Angie Turner of One Potato, Two Potato, Dead by Lynn Cahoon 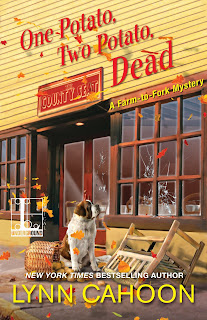 Life is connected. Especially in small towns. When I agreed to donate staff time from the County Seat to the local soup kitchen, I mainly was interested in the new man who was taking up a lot of my best friend's time. Taylor seemed to be perfect for her. Interested in using food to solve the homeless problem in Boise made me assume he was a pretty great guy. Despite the fact he was a trust fund baby.

What can I say, rich men. I don't trust them.

Anyway, we signed up and I promptly forgot about the commitment. Well, mostly, I have to say I was knee deep in developing a new main dish for the restaurant when Ian showed up in my driveway. Ian's my boyfriend who sounds like he's an English lord instead of the manager of the local farmers market. We met over goat cheese. I know, it sounds like a fun story to tell our grandkids. If we get there.

Then he tells me we're going to be late. Since I had food prepared anyway, we skipped the going out for lunch part of the day and he helped me decide on what recipe to keep working on. And one to dump.

It's always good to have that calm rational voice telling you when you didn't hit the mark. I should have realized that I was going to play that role for not only Felicia this week, but also another woman I care about. One of my kitchen staff who was involved in something deeper than just who she should date.

It's late and I don't want to ruin the story for you. Check out the County Seat if you're in River Vista one of these days. I'll tell you the rest of the story then.


Angie Turner’s restaurant, The County Seat, is conveniently located near a first-class farmers market—so her menu is full of fresh ingredients. But a visiting culinary professor has just had a taste of something very unhealthy . . .

Angie first meets Daniel Monet at a local mission, where she and her chef-in-training, Hope, are serving barbeque chicken poutine to the homeless. Monet is one of Hope’s teachers—but Angie’s boyfriend knows him from his youthful days in England. But soon, the bon vivant is no longer vivant. When Monet is found dead, with Hope’s prints on the wine glass next to him, it will be Angie who has to sauce out the real killer . . .

Lynn Cahoon is the author of NYT and USA Today best-selling Tourist Trap cozy mystery series. GUIDEBOOK TO MURDER, book 1 of the series, won the Reader's Crown for Mystery Fiction. She is releasing three holiday novellas in the Tourist Trap series this year and three more in 2019. She also pens the Cat Latimer series available in mass market paperback with book 4, SLAY IN CHARACTER, releasing late 2018. Her newest series, the Farm to Fork mystery series, released in 2018 with WHO MOVED MY GOAT CHEESE in March and KILLER GREEN TOMATOES in July. ONE POTATO, TWO POTATO, DEAD releases in early 2019. Lynn writes romance under Lynn Collins. She lives in a small town like the ones she loves to write about with her husband and fur babies. Sign up for her newsletter at www.lynncahoon.com