I'm doing something a little different today--this is an excerpt from Murder, She Uncovered, which is coming out on May 28!

The road was littered with debris.  To Elizabeth, it looked the way she imagined the surface of the moon would look.  Once lovely houses were reduced to piles of sticks and boards, and some homes were gone altogether—washed out to sea by the storm surge.
Elizabeth and Kaminsky were on their way to Westhampton on Long Island—assuming they’d be able to get through—for a story on a body that had been found in a family’s summer home behind the Westhampton Country Club.  Its location had saved it—while there was water damage on the first floor and all the shutters on the east side of the house had been stripped off, it was still standing.
The inside of the car smelled unpleasantly of cigarette smoke, onions and egg salad—Kaminsky’s daily lunch.  Elizabeth rolled the window down a bit further and took a deep breath of the fresh air rolling in.
“Why is the editor so keen for a story on finding this one body?” she said as they maneuvered around the front door of someone’s house, which had landed smack in the middle of the road.  “They’ve found over six hundred bodies already.” She shivered.  “What makes this one any different?”
Kaminsky rolled down his window and flipped the butt of his spent cigarette out.
“According to the police chief, she—it’s a young woman—wasn’t drowned in the flood from the hurricane.  She wasn’t even conked on the head by falling debris like they first thought.  When they turned her over, they found a tidy stab wound in her back.”
Elizabeth quickly stifled her impulse to gasp.  Kaminsky would never let her hear the end of it if she did.  He often forgot—or chose to forget—that she wasn’t as seasoned as he was.
“Who is she?”
“Someone who worked for the Post family most likely.  She was found in their house in one of the third floor bedrooms.  The Posts are back in New York City—they only summer in Westhampton.”
“Stop,” Elizabeth cried, pointing to a house where a yacht, driven by the winds and the roiling water, had crashed through the front door.  She grabbed her camera and jumped out of the car as soon as it rolled to a stop.
“Would you look at that?”  Kaminsky stared at the house, his eyebrows raised.  Finally he pulled a pack of cigarettes from his pocket, lit one, took a puff and let out a stream of smoke.  “Becker at the paper said they’re calling the storm the Long Island Express.”  He pulled a handkerchief from his jacket pocket and blew his nose loudly.  “It sure as heck came through like a freight train.” 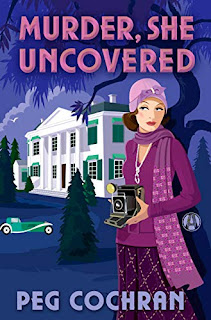