Celebrating the Summer Solstice in Style... by Cathy Ace 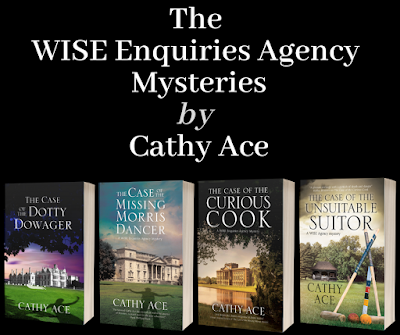 Celebrating the Summer Solstice in Style

Hello there, how lovely of you to come to visit me again. Do take a seat. Yes, the morning room here at the Dower House on the Chellingworth Estate is lovely in the summer sunlight, thank you. Of course, I always have a bit of a problem thinking about today – 22nd June – as the first full day of summer. It just doesn’t feel like “midsummer” here in Wales; the really warm weather…if we get any at all…hasn’t usually arrived yet. August is when we tend to get that. And with all this grass, and these trees it can be sweltering here.

The Orangery thrives because of it, of course...and it's oddly somewhat cooler inside there in the heat of summer.

I also seek respite from the heat within my own walled garden - so good at creating shade, when it's needed.


No, I don’t care for the heat. Not now. I’ve just turned eighty, so I suppose it must be age-related, because I used to very much enjoy the heat. Especially in Egypt. But that’s a desert, and it’s true what they about dry heat – it really is less exhausting than humidity. Egypt? Oh yes, I visited several times with Chelly – the seventeenth Duke of Chellingworth – Henry’s late-father. I called him Chelly. I don’t think I can tell you what he called me!

What was I saying? Oh yes, Egypt. Chelly took me there many times; we went once especially to see the midsummer's day sun rise over Queen Hatshepsut’s obelisk at the Karnak temple in Luxor. I will never forget it. We rose very early – it was still totally dark, because we wanted to be inside the temple as the sun came up. That took some doing, I can tell you, because the chaps who live inside the grounds, and act as both overnight guards and as guides who unofficially take you around the place – which sometimes feels more as though you’re being stalked than guided – well, they don’t like to open the gates until the sun is up…so Chelly had sent a driver ahead of us with some cash to negotiate early access.

I must say, it was worth it. We were alone, except for a few excited, if somewhat puzzled, live-in guards, who couldn’t seem to grasp why on earth we wanted to be there to see the sun come up. But oh, when it did, it was a magnificent sight. The stone of the obelisk is such a magical color, and I could imagine how the pillar must have looked when its tip was covered with beaten gold, as the Queen had designed it to be when it was built almost three thousand five hundred years ago .

The gold’s gone nowadays, of course, but the entire temple complex is still breathtaking, especially the obelisk built by a woman who rose to become a fully recognized pharaoh – almost fourteen hundred years before Cleopatra. Quite a gal, I bet!

But that’s enough about my best-ever summer solstice; you must tell me about yours. Really? Sitting beneath an oak tree reading a good mystery? Sounds delightful, I must say.

By the way – would you like some tea? I’ll call for some presently.  Then we could visit the small folly at the rear of Chellingworth Hall – it differs from our three other follies in that it’s Egyptian in design, and I’ll bring the photo album Chelly and I made up after our trips. I’ve got some lovely photos of us at temples along the Nile. Mint tea, today, I think - they drink it there, in Egypt, you know. Not the same as a strong, proper cuppa, but refreshing, in that heat.

How do they make it? Well, we did ask, but they were rather guarded about their own methods, so I had cook come up with a recipe for us when we got home. I realize it’s a terribly simplified version, but the flavor allows me to recall our wonderful times in Egypt. Let’s have some now! 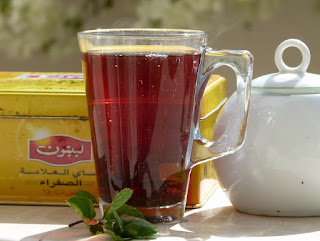 Make a pot of strong, black tea – allow it to steep well


Cover with the hot tea


Allow the crushed mint leaves to fall to the bottom of the glass, and drink – carefully, because it might still be very hot.
Delicious!

You can find out more about the women who run the WISE Enquiries Agency, and the woman who created them, by clicking here.