Digging up History in Philadelphia 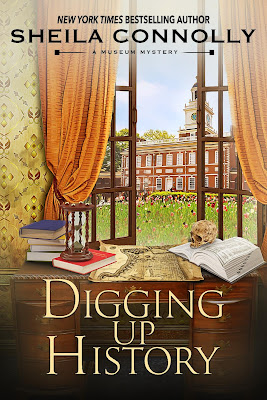 You may recognize me—James Morrison, from the Philadelphia FBI office. Nell Pratt and I have been a couple for a while now—I’m not exactly sure when we figured that part out—and most recently we bought a house together, which I assume implies that we both expect this relationship to last. I do, anyway.

Living with Nell is full of surprises. Her day job is running the Society for the Preservation of Pennsylvania Antiquities, but for reasons that still mystify me she spends much of her spare time solving crimes, both old and new. I’ve been known to provide assistance, or at least moral and legal support in her efforts, but she does all the work, with some help from her friend Martha Terwilliger. I have to say that Nell’s a very independent woman, so she doesn’t come whining to me to help her. Since many of the crimes she’s stumbled over (I use that term deliberately, because it’s not as though she goes looking for them) involve aspects of Philadelphia-area history, she’s better equipped to investigate them than I am, so my principal job is to serve as a sounding board for her ideas, and occasionally to protect her (to be fair, she’s protected me as often as I’ve protected her).

The most recent investigation that we undertook was unexpected and very surprising, and it involved Philadelphia history, the police department, the city’s medical examiner, a property developer, an administrator from another local museum, a summer intern at the Society, and of course Martha Terwilliger. As you might guess, I was something of a fifth wheel, but I was happy to help. And I have to add, she may win the prize for finding the greatest number of bodies in Philadelphia.

Life is not dull when you live with Nell Pratt.