I’m sure you remember me.  From A Clue in the Stew?  Snowflake, Vermont was absolutely buzzing when mystery fans discovered I’d be visiting their town and holding a book signing.  You see, when I published Murder Comes Calling, I never expected that my little book would become such a bestseller!  Was I ever amazed!  Here’s a little snippet if you’re curious:

Rebecca Mayfield was lost in thought as she sat on the subway bench waiting for her train to arrive.  The murderer had targeted women alone at night, in dark alleys and city streets. E ach victim had complained of mysterious phone calls for three consecutive days before their deaths.  All young women in the prime of their lives. What sort of monster would violate the innocent? she thought.  She knew she was on to something, but her editor had threatened to pull the story unless she came up with something solid, something the police hadn’t yet discovered.
The bench began to vibrate beneath her.  She heard the roar of the incoming train.  Gathering her purse, she stood and approached the edge of the platform.  She glanced down. Her heart almost stopped.  On the tracks below lay another victim of the killer, a thin plastic cord wrapped around her neck.  Rebecca’s screams were drowned by the roaring sound. She couldn’t possibly halt the train in time. She covered her eyes as the brakes began to squeal. 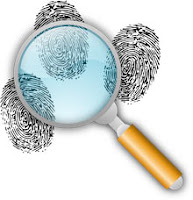 There’s only one teeny problem, my publisher expects another book.  And I’m not sure I’m quite up to the task.  That’s the real reason I’ve come to Snowflake.  I have to look up an old friend.  Well, actually, to tell you the truth, he’s not really a friend, he’s sort of an ex-husband I deserted years ago.

Oh, I know what you’ll say.  You’ll think I’m a terribly heartless woman . . . and you might be right.  I probably did break his heart.  But really, he was such a terrible bore.  I couldn’t stand to live with him for one more day.  I don’t know what I was thinking when I married him.  I thought he was so sophisticated and so intelligent.  I guess he is intelligent but he was still a dreadful bore!

So, that’s why I’m in Snowflake.  I have to ask a favor of him.  It’s rather urgent.  You see, I have a secret.  If you’ve read A Clue in the Stew, you’ll know what my secret is.  I certainly don’t want to mention it here.  But I’m sure I can convince him to help me out.  I’m sure he’ll understand and perhaps he still loves me a little bit.  He might be angry at first, but he’ll get over it.  And even if he hates me, I’m sure he would never do anything to hurt me.  I’m the last person in the world who could end up a murder victim!  If you'd like to know more about me and all the Soup Lovers' Mysteries, you can visit my author, Connie Archer, at her website, at Facebook and Twitter @SnowflakeVT.