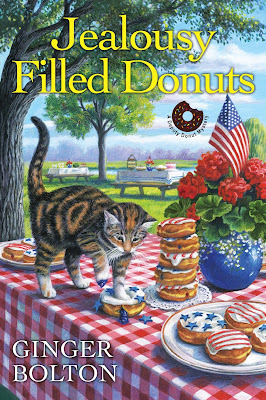 by Emily from Jealousy Filled Donuts by Ginger Bolton

The Fourth of July celebrations in my town, Fallingbrook, Wisconsin, were supposed to be fun and fabulous. And they were--mostly--until the grande finale at the fireworks.

That was five days ago, and the murderer has not been caught.

I own Deputy Donut with Tom, Fallingbrook's former police chief. Our donut and coffee shop is a great place to hear rumors and catch  a clue or two about who might have committed the crime.

I have a few suspects in mind. Every one of them could have been jealous, in one way or another, of the victim.

Of course I'll leave the investigating to the police, but I'm feeling threatened.

Also, I'm worried about our summer assistant, Jocelyn, who is only nineteen. She's one of Wisconsin's top gymnasts. In addition to being athletic, she's cheerful, enthusiastic and competent, and our customers love her. I'm not old enough to be her mother, and Tom's not old enough to be her grandfather, but both of us want to protect her. She's trying to hide it, but I can tell that someone is frightening her.

I don't want Jocelyn to be harmed or to quit working at Deputy Donut, so I can't sit around doing nothing. The murderer might strike again.

I'm cautiously asking a few innocent questions around town, and I'm learning a lot. Not enough, so far, though . . .

Don't worry, I don't plan to do anything dangerous.


Jealousy Filled Donuts will be on store shelves August 27th, but you can preorder it now.Grab yourself a donut and a copy of this page turner!-- Connie Wilson, Editor-in-Chief, moderncat magazine

Today, July 9th, Emily is in the midst of an investigation. Feel free to give her some advice in the comments below. One commenter will be chosen at random to receive a signed copy of Goodbye Cruller World.